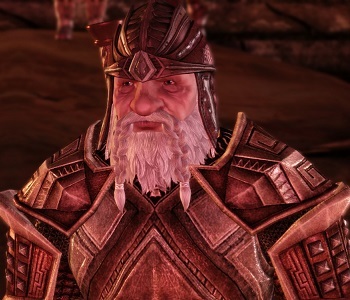 Voiced by: Richard McGonagle
"Denial of the traditions of our people does not qualify as a political technicality."

The King of Orzammar on the eve of the Fifth Blight, Endrin has ruled for over 40 years and is widely regarded the most respected King in four generations. But while Orzammar is in the middle of a much needed reprieve from the threat of the darkspawn, the machinations of Dwarven politics do not rest and are often far more deadly. 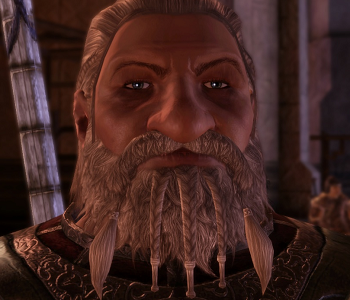 Voiced by: Zach Hanks
"I know I will never be loved in Orzammar, but I will rule. Nothing, not even treacherous kin, will stop me from claiming my right."

The eldest of the three Aeducan siblings, and the direct heir to Orzammar's throne. Despite his status, he isn't very popular due to his poor attitude. 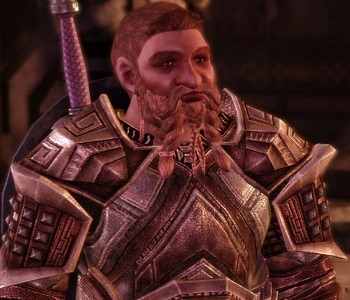 Voiced by: Wally Wingert
"We need absolute unity to fight against the fulcrum of true evil."

The cunning and intelligent third Prince of Orzammar, and younger brother to the Dwarf Noble PC. He wishes to become king so that he may end Orzammar's isolationism, but his succession is unlikely, since eldest brother Trian is the acknowledged crown prince, while the Dwarf Noble PC is far more popular with the people. Of course, if a tragic "accident" were to befall his siblings... 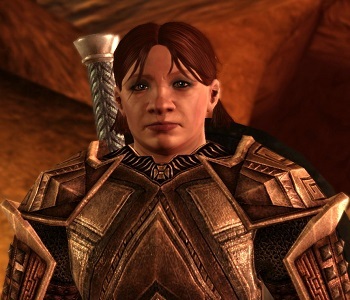 Voiced by: Helen Wilson
"Is this what our empire should look like? A crumbling tunnel filled with darkspawn spume? The Anvil will help us take back our glory!"

The only Paragon in four generations, Branka was a master smith who invented a new kind of smokeless fuel that allowed Orzammar to increase its production level by a third and ended many diseases related to it. She also happens to be Oghren's wife, who left him two years ago to search the Deep Roads for an artifact that she was convinced could restore the glory of the Dwarven Kingdom. Whichever candidate for the throne the PC supports, Branka's vote is the final push they need to take the throne... assuming she can be found. 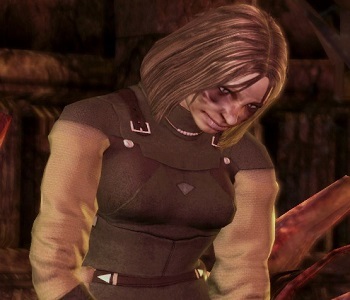 Hespith is the commander of Branka's troops as well as the Paragon's former lover. When Branka disappeared into the Deep Roads along with her entire House, Hespith went with her, and she's presumed lost by the people of Orzammar. She turns up near the end of the Warden's search for the Anvil of the Void, however, offering some helpful information about Branka as well as what became of the rest of the house. 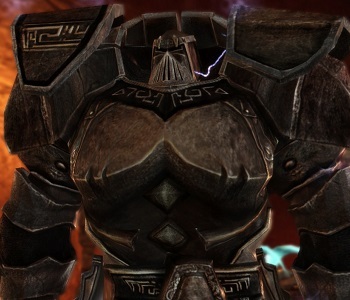 Voiced by: David Lodge
"The Anvil of the Void allowed me to forge a man of stone and steel, and because of it I was made into a Paragon."

An ancient dwarven smith of legendary skill and one of Orzammar's most famous Paragons, Caridin was the creator of the Golems. At the time of Origins, his home thaig has long since fallen to the Darkspawn and everyone assumes the discoveries he made are lost, but Branka is fascinated by his research and goes into the Deep Roads in an attempt to recover it. 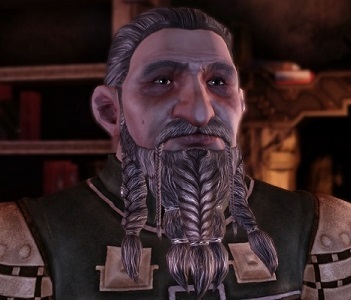 Voiced by: Robin Sachs
"Your father made me swear on his deathbed that you would not succeed him."

The best friend and confidant of King Endrin Aeducan, as well as High-General of Orzammar and a deshyr in the Assembly. At Endrin's request, he tries to claim the throne to stop Bhelen's schemes. 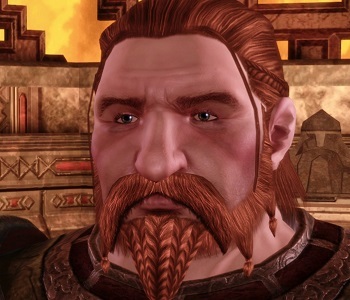 The second of the Dwarven Noble PC. 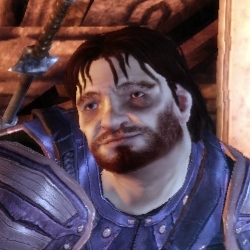 Voiced by: Nolan North
"It's my claim, not yours! Crunch your bones!"

Ruck is a young Dwarf who was stranded in the Deep Roads for five years. Like anyone abandoned there, he's grown deformed and half-mad from consuming darkspawn flesh, likely in the early stages of ghoulification. However, he is willing to trade with you, and is essentially a store in the middle of the Deep Roads.

Dagna
A young girl of the Smith Caste, who wishes to study in the Circle of Magi.

Bodahn Feddic
A dwarven merchant whom the Warden and his companions rescue on the Imperial Highway outside of Lothering, Bodahn and his adopted son Sandal thereafter travel with the party, providing a ready source of supplies as well as enchanting services.

For more info, see this page.
Sandal Feddic
The adopted son of the dwarven merchant Bodahn Feddic. Sandal is...special, to say the least, as he is lyrium-addled. However, he has a unique and natural talent when it comes to enchanting, displaying skill that surpasses that of even grandmasters. He follows the party along with his father and the two offer their services in the party camp. 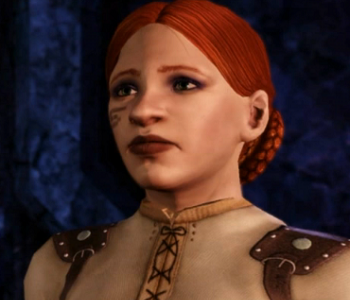 Voiced by: Corri English
"I can only imagine the horrible things he's made you do."

The Dwarf Commoner PC's older half-sister, Rica was forced into noble-hunting by the crime lord Beraht, while her sibling does Beraht's dirty work to pay off the debts from the lessons to make her act like a noble lady. 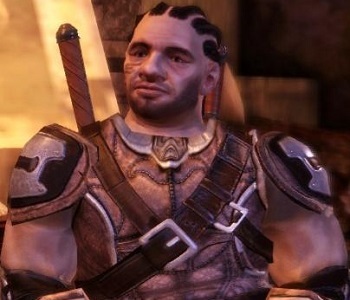 Voiced by: Brian Bloom
"I've been writing a poem about it. It starts, 'Oh, you're really, really cursed to have no caste / You noble lords can shove it up your...' but I couldn't think of a rhyme."

Best friend of the Dwarf Commoner PC, Leske works with the PC as one of Beraht's casteless thugs. 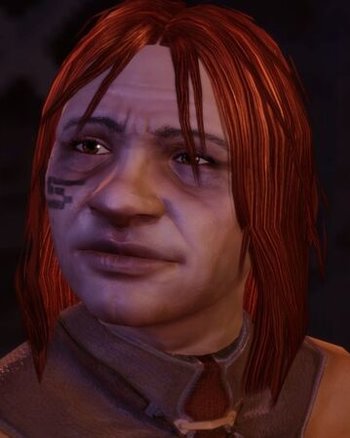 Voiced by: Jeannie Elias
"The world's a cruel place. You had to learn that! You think you'd be where you are if I'd let you run from a few slaps?"

The Dwarf Commoner PC's useless drunk of a mother. She doesn't seem to do much except drink mosswine and yell at her children trying to keep her afloat. 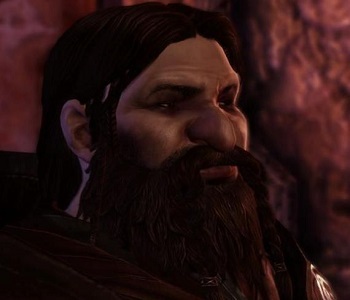 Voiced by: Pat Fraley
"You keep your head down and say 'aye' to any job I decide is low enough for scum like you."

The leader of the Carta, one of Orzammar's largest crime syndicates, and a member of the merchant caste. He dreams of becoming a noble and moving to the Diamond Quarter. The Dwarf Commoner PC and his/her sister, Rica, are forced to work for him due to their Casteless status. 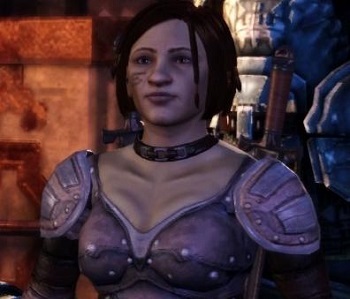 Voiced by: Salli Saffioti
"Well, you picked the wrong side, stranger. It doesn't matter who's king, as long as there's a queen!"

Beraht's second-in-command and rumored lover, who takes over the Carta after his death. Like him, she cultivates allies among the people of Orzammar, both common and noble, which makes it difficult for the authorities to act against her. Both Bhelen and Harrowmont will ask the Warden to eliminate her in order to curry favor with the assembly.