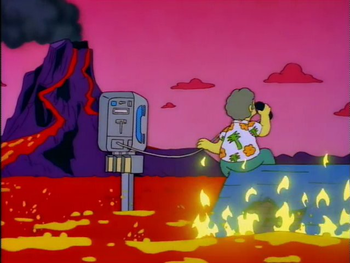 "I packed my sunscreen. I'm fine."
"Fire — as long as you're not directly touching it, it can't hurt you."
— Mike Nelson, The Last Airbender RiffTrax
Advertisement:

Have you ever put your hand in front of a fire? You should have felt heat emitting from the flame long before touching it. This principle applies to anything that's even mildly hot.

Most TV writers and video game developers, however forget that part. The hero is making his way through the Lethal Lava Land, but wait! There are floating rocks, he can make it across to the other side! Except in the real world, the heat coming off of the lava would have cooked him already.

does not exist in TV land. Convection, schmonvection—as long as you don't touch the lava, you're okay. Note that this trope covers heat radiation as well, and seeing as large explosions create shockwaves as well as fireballs, this also covers Overpressure Schmoverpressure. TV also ignores the other hazards of volcanoes and lava flows, such as toxic gases and blinding, choking ash.

Although lava is the primary offender, this also applies to any time convection is ignored for the sake of Rule of Cool, such as when a character is standing above or near a large fire, hot water, or any other extreme heat source. If you don't touch the raging inferno, boiling lake, or white-hot walls, you'll be fine. Rule of Perception also has a hand in this trope: the writers, animators and viewers can't feel any heat, so obviously there isn't any. This is especially applicable to Video Games, though having to dodge both lava and the invisible heat it gives off would be rather irritating.

This is a subtrope of Artistic License – Physics, and a common inaccurate portrayal of Energy (in this case, thermal energy) in fiction.

Occasionally you may see the visual effects of convection in the form of distortion of heated air—which will still be safe to be near, as long as you don't touch the magma itself.