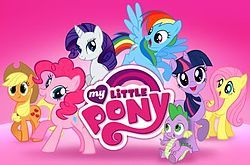 "I used to wonder what friendship (and lots of gems) could be."

This game plays similarly to other mobile village simulators such as The Smurfs Village and The Simpsons: Tapped Out, with you collecting bits and gems and heart crystals to rebuild Ponyville, unlock more items and ponies and eventually defeat Nightmare Moon. As it is very closely bound to the mythology and themes of its parent cartoon, you can refer to the trope pages for the cartoon as well for even more info related to this game.