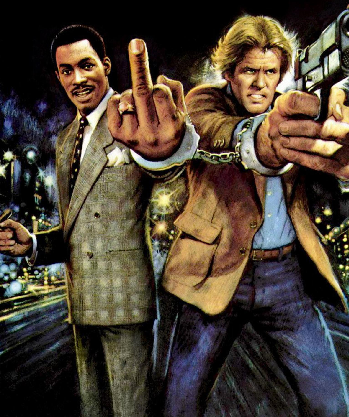 "She was six feet of black dynamite! He was a short Hasidic Jew."
— Cleopatra Schwartz, The Kentucky Fried Movie
Advertisement:

A variation on the Odd Couple, involving a white person and a black person. Usually, the white person is a strait-laced by-the-book type, while the black person is a funky, urban type who doesn't have much respect for authority. Most commonly, they're cops, assigned as partners after their old partners die/get disgusted and walk away. Generally, the two will make a fairly good team if they can work out the personality clashes, with the strengths of one covering for the weaknesses of the other. And there's a better-than-even chance they'll wind up as unlikely friends before the story is over.

This trope tends to get subverted nowadays due to increased racial awareness, so that it's the white person who's a rebellious hothead, while the black person is smart and savvy. Another common subversion is for the black guy to be uptight and the white guy to be relaxed. An alternate version is a pairing of a white character with a Hispanic character called a Cafe con Leche. Please note, however, that the characters being of two different races isn't enough for this trope; there must also be some kind of contrast in their personalities for it to work.

For American media, this may be more common

in the movies (such as Lethal Weapon, Die Hard or Die Hard with a Vengeance) than on TV as television shows often seem more segregated.

Subtrope to Red Oni, Blue Oni. See also Token Black Friend. Irishman and a Jew is an older variation of this trope. If they're not different races, the trope is All Work vs. All Play.

Not to be confused with the 90s hip hop group.