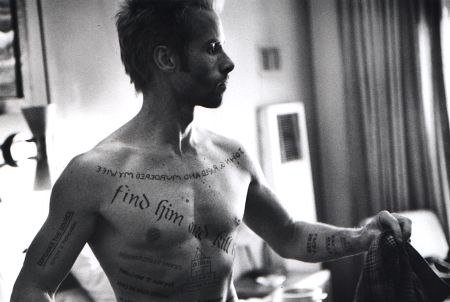 He Couldn't Find a Pen, but luckily the tattoo parlor was right next door.
"It's just a permanent way of keeping a note."
— Lenny, Memento

Generally a subset of Power Tattoo, which sometimes overlaps with Mark of the Beast and Scannable Man. The Human Notepad is when a character is covered with writing. Perhaps he was the victim of a prank (expect frat boys to pull this one), or perhaps he is making notes on himself as an aid to memory (in which case this is mostly seen on the back of his hand). In Speculative Fiction, it may indicate possession by some powerful foreign entity. In supernatural cases, the text usually covers the whole body, although sometimes just the face or another prominent part is covered, and it appears only when the possessing entity is actively attempting to control or providing power to the marked character.

The significance of this particular form of Power Tattoo is apparently that the controlling force causing the phenomenon is intelligent, as well as alien to the consciousness of the recipient. Thus it is often eldritch or archaic in nature, and as a result completely unintelligible; the further in appearance from any writing system familiar to the viewer, the more inhuman the source will ultimately be.