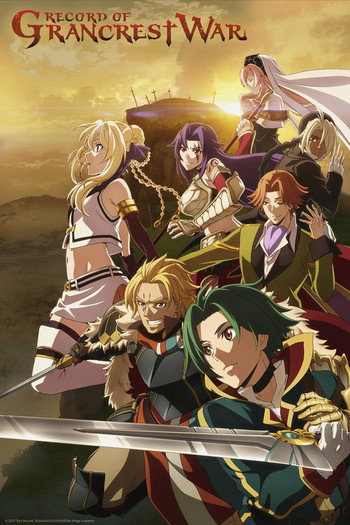 Record of Grancrest War is a series of Fantasy Light Novels written by Ryo Mizuno of Record of Lodoss War and illustrated by Miyu who previously drew for the Sci-Fi light novel series Chrome Shelled Regios, which ran for 10 volumes. It was adapted into an anime in 2017 by A-1 Pictures.

One day, demons from the dimension of Chaos invaded the continent of Atlatan, bringing heavy destruction with them. To fight back, humanity used Crests, a type of magic capable of sealing Chaos. To truly obtain victory, the Grancrest, most powerful of the Crests, is needed.

However, since whoever owns the Grancrest would become Emperor of Atlatan, the nobles instead fought each other to gain more Crest powers and lands, rather than joining forces to defeat the demons of Chaos. Enter Siluca Meletes, a young mage who scorns the feuding lords for abandoning their people. She then meets Theo Cornaro, wandering knight and Crest holder who is trying to liberate his hometown from its tyrant lord. Joining forces, Siluca, Theo and their allies fight together to end the war between the different noble factions, and put an end to the threat of Chaos.

Despite the name, it is unrelated to Granblue Fantasy and Record of Agarest War. The series is licensed by Aniplex USA for a North American release, with the first half of the series being released in May 2019 and the second half in August of the same year. The manga adaptation, illustrated by Makoto Yotsuba, has been licensed by Shogakukan and Shueisha's English-language imprint VIZ Media. It ended in June 2019 with 48 chapters and adapted only two volumes of the original light novels.