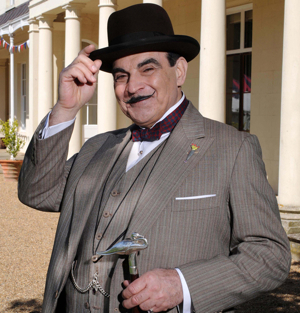 Bonsoir, mon ami.note David Suchet in his definitive portrayal of the detective.
There are moments when I have felt: Why-Why-Why did I ever invent this detestable, bombastic, tiresome little creature? ...Eternally straightening things, eternally boasting, eternally twirling his moustaches and tilting his egg-shaped head... I point out that by a few strokes of the pen... I could destroy him utterly. He replies, grandiloquently: "Impossible to get rid of Poirot like that! He is much too clever."
— Agatha Christie
Advertisement:

Being fastidiously neat, he is often wrongly "diagnosed" as OCD or OCPD.

Mystery writer Sophie Hannah was officially licensed by the Christie estate to write Poirot novels. She has written four of them since 2014.