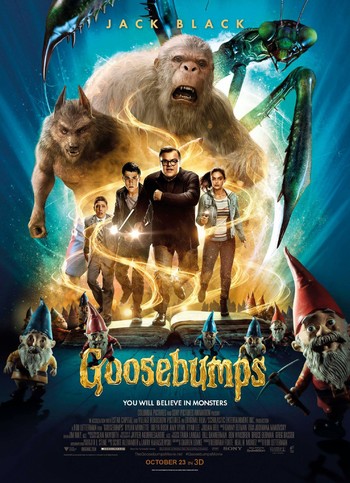 Viewer Beware, You're In For a Scare...
"Every story ever told can be broken down into three distinct parts: the beginning, the middle, and the twist."
—R.L. Stine
Advertisement:

Goosebumps is a 2015 horror urban fantasy comedy directed by Rob Letterman (who has collaborated with Jack Black with his directing Gulliver's Travels) based off of R. L. Stine's famous Goosebumps book series. Starring Dylan Minnette and Jack Black as Stine himself, who along with Stine's daughter Hannah (Odeya Rush), must combat every single one of Stine's creations after Zach (Minette) and his friend Champ (Ryan Lee) accidentally unleash them from the very books themselves.