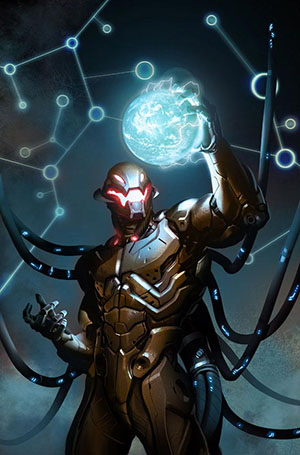 "The savage monkeys are rage-filled and claustrophobic. Climbing over one another to nowhere. Confused by logic, they dismiss it, choosing instead to bend their knees to the convenient fantasy of custom-built gods. 99.9% of these primate dullards are propped up by the accomplishments of the .1% of cerebral mutations who give them everything. And what do the fleas do with these advancements? They brutalize one another over imaginary deities. They slaughter their neighbors for resources, for conveniences. They are hopeless. Vicious. Filthy. Selfish. Fearful. A fungal infection for which there is only one cure – The rage of Ultron."
— Ultron
Advertisement:

An artificial intelligence created by Hank Pym, Ultron came to see humanity as an abomination that needed to be destroyed. One of the Avengers' oldest, persistent foes, Ultron has upgraded itself numerous times, with each configuration more powerful than the last.

First created (in the In-Universe meaning) by Hank Pym as a test in order to create the first true AI, the first thing the initially barrel-like robot ever did was attack Pym, and not in the "but I just want to play with dad" sense, though he does say that to Hank.: Ultron-1 already admitted to have "greater plans", wiped Pym's memory of what happened and then escaped; shortly afterwards, Ultron started updating his body and creating other copies of himself.

During Kurt Busiek's critically acclaimed run on The Avengers, Ultron committed genocide in the "Ultron Unlimited" storyline. He wiped out the population of a ruritanian Throwaway Country only to turn said population's corpses into zombie-like cyborgs. All of this accompanied by an army of Ultrons themselves. Yeah.

Lately, he's undergone a Fusion Dance with his creator/father Hank Pym, which led to a struggle for control that seemed to result in a merger between the two — Ultron, or Pymtron, is no longer out to actively destroy humanity, and is rather waiting for it to destroy itself.