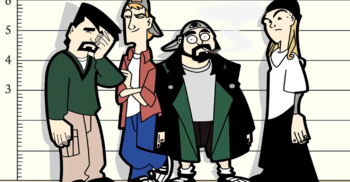 Left to right: Dante, Randal, Silent Bob and Jay. note Huh... thought Silent Bob was taller...
"Why are we walking like this?"
— Dante
Advertisement:

Clerks: The Animated Series is a loose adaptation of the film Clerks by Kevin Smith, running from May to June, 2000 on ABC, and Smith helped co-develop the show with partner Scott Mosier and David Mandel of Seinfeld and Curb Your Enthusiasm fame. Dante Hicks is the much put-upon clerk of a Quick Stop convenience store in Leonardo, New Jersey. He is tormented by his friend, video clerk Randal Graves, as well as stoner hangers-out Jay and Silent Bob.

Included more wackiness and fantasy than the film. This was lampshaded. Contained little swearing or sexual references. Also lampshaded. Added such things as an arch-nemesis, Corrupt Corporate Executive Mr. Leonardo Leonardo and his Odd Job-like assistant, Plug. Had a Token Minority, Lando, who showed up just to be black, saying a few words every now and then. All of that lampshaded as well. It also had a Clip Show, in the second episode. Lampshaded, at least the first part.

Marked the first time the character designs of Stephen Silver

were added to the animation direction of Steve Loter and Chris Bailey. This team, with a distinct visual style, would come up again in a much different place. Also had an impressive voice cast, most notably the four main actors in the original film (Brian O'Halloran, Jeff Anderson, Jason Mewes, Kevin Smith) reprising their roles.

Only six episodes were produced. Episodes four and two made it to air, in that order. ABC ordered the series to capitalize on the success of primetime adult animation like The Simpsons and South Park, but after Who Wants to Be a Millionaire? became a hit, quickly dumped it because it didn't fit with their programming. Fortunately, it was released on DVD (and oddly VHS too, perhaps thanks to its short lengthnote The six episodes come out to just over two hours.) and the show reran in full on Comedy Central and Adult Swim.

Smith had planned a Direct to Video film, entitled Sell Out, about Dante and Randal making a film in the Quick Stop, but when Harvey and Bob Weinstein left Miramax in the hands of Disney, Smith refused to work with the Mouse House without the support of the Weinsteins. Miramax's later non-Disney owners briefly partnered with the Weinsteins, which brought a greater likelihood for the series to return in some form or another, but as of 2013

, nothing happened — and given Harvey Weinstein's criminal trials and fall from grace after 2017, seems somewhat unlikely. For what it's worth, the films basic plot was recycled into what finally became Clerks 3.

Interestingly, Smith has always referred to the show as Clerks: The Cartoon (which it was also called in a trailer shown at film festivals) or "the Clerks cartoon", but never Clerks: The Animated Series. Go figure.