That One Level
aka: Scrappy Level 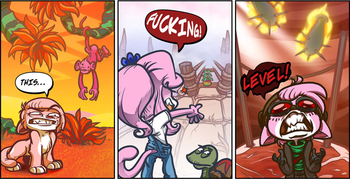 Aeris remembers why she stopped playing these games.note L - R: "Can't Wait To Be King" from The Lion King, "The High Road" from Crash Bandicoot (1996), "Meat Circus" from Psychonauts.
Sivert Fjeldstad Madsen: Since you've made every game... Did you actually beat Battletoads?
Lord of Games: I assume you mean that tunnel level with the hoverbike. I, er... well, of course I beat it. It's not as if I or anyone else would release a game that couldn't be finished with standard human reaction times.
— Facebook Q&A

There are times in video games where, instead of a boss becoming infamous for being frustrating and/or difficult, a level does. It could be that it is infested with Goddamned Bats or Demonic Spiders, is really long, lacks items or checkpoints, is home to That One Boss, is home to That One Puzzle (or at least one with a Guide Dang It!), has you trying to outrun an Advancing Wall of Doom or otherwise sticks you with auto scrolling, tasks you with keeping a NPC without any basic survival instincts alive, has a different mechanic in play (often from a level-specific Unexpected Gameplay Change, such as a Stealth-Based Mission or Action-Based Mission), or is The Maze level. If you experience frustration and anger at a level that may have one or more of these things, congratulations: you're playing That One Level.

Sometimes, these levels are polarizing; a portion of players find it infuriatingly hard, while others don't have much of a problem with it. This can be a matter of general skill, familiarity with a particular control scheme or just plain luck, depending on the level. Game forums are literally packed with examples of this, which often results in discussions about said levels turning into flame wars.

Although it isn't a necessary requirement, it should be noted that many of these levels are hard on all difficulty settings. If a level is difficult on the highest difficult setting, it's to be expected. Chances are that one level is almost as infuriating on easy as it is on Harder Than Hard.

Escort Missions, Slippy Slidey Ice Worlds, Under the Sea and Down the Drain-esque stages tend be more receptive to becoming these levels. For an optional level that is intentionally difficult, see Brutal Bonus Level.

Please note that there is an emphasis on the "One" in "That One Level". If all or most levels in the game are difficult, then you have Nintendo Hard. The level has to stand out in difficulty compared to the other ones in the game to qualify as an example.