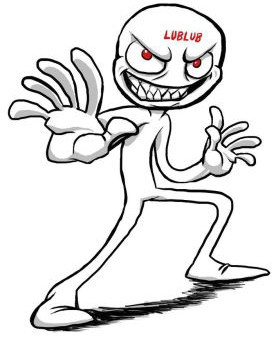 Lub Lub, a character used as his avatar.
WhoIsThisGit

is a bit of a mix between a game reviewer and Let's Player. He is unique from the rest because he communicates almost entirely via on-screen text. There may be some times where he may talk, but they are mostly reserved for less popular videos, such as the Tails Defense Squad.
Advertisement:

Also unlike most Let's Players, he doesn't actually do much let's plays; when he used to be smaller, he did Kirby, Double Dragon, and Fire Emblem walkthroughs (the latter of which is currently going on in an alternate collab channel between him and SolarKnight99, The Awful Tacticians). He mostly does comedic commentary on common tropes he finds in gaming. He has the following series:

open/close all folders
Best/Worst/Weirdest Levels Ever
Boss Analysis
An analysis on, well, bosses. The videos highlight their difficulty, design, fun factor, etc. He occasionally attempts no-damage runs on these as well.
Advertisement:
Tails Abuse Collection
In this series, he abuses Tails. It has three subseries:
Creepy Bad Endings
A series on games with Multiple Endings where at least one ending is really, really awful. (It also includes Non Standard Game Over and It's a Wonderful Failure scenarios.) This happens to be his worst video game fear.
Creepy Time Limits
A series on Timed Missions that freak him out. If both a time limit and bad ending overlap, it will normally be covered on a CBE video.
The Weakest Characters in Gaming Ever
A series focusing on video game protagonists, antagonists, et cetera who are exceedingly easy to kill.
The Most Powerful Characters in Gaming Ever
The exact opposite.
Advertisement:
Creepy Moments
Other Series

Before he focused exclusively on video games, he used to do Crap Cartoons, a series of cartoons made in Windows Movie Maker. This, unfortunately, got drowned out by his more popular videos, and is rarely updated anymore. He made 48, including an anniversary. A side character called Lub Lub was introduced there, and is now The Stinger of his videos.

His videos contain examples of the following: