That One Level / Super Mario Bros. 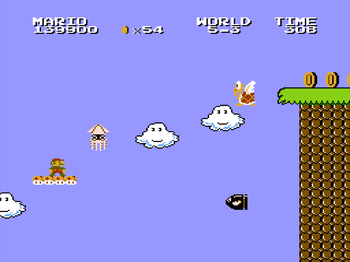 The Lost Levels? Seems more like making this jump is a lost cause...
Advertisement:

When a franchise has been running for over 35 years, has countless installments, and features the most prolific video game character in history, you would expect it to have one or two tough moments. But these take it to another level.

Please refrain from adding any Brutal Bonus Levels, That One Sidequests (such as specific Stars, Shines, Moons, etc. in the 3D games), or Self Imposed Challenges. Examples from Game Mods and Fan Games are also disallowed, as they are unofficial and thusly have no standards for difficulty.

Mario Party and Super Mario Sunshine have their own pages.