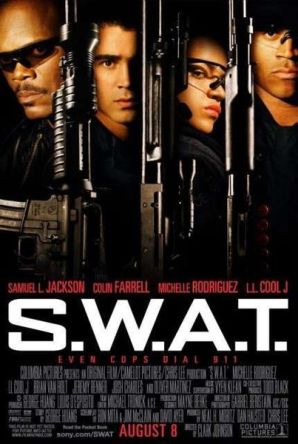 Jim Street (Colin Farrell) is an officer on the Los Angeles Police Department's SWAT Team. However, after his partner Brian Gamble (Jeremy Renner) disobeys orders and accidentally shoots a hostage while foiling a bank robbery both of them are thrown off the team.

Six months later, courtesy of the intervention of Sgt. Dan "Hondo" Harrelson (Samuel L. Jackson), Street gets a second chance as part of Hondo's new, handpicked S.W.A.T. unit. But can the team complete its first major assignment, to deliver a French mob boss (Olivier Martinez) into federal custody, after said mob boss has offered $100 million to anyone who breaks him out?

Also stars LL Cool J as Officer Deacon "Deke" Kay and Michelle Rodriguez as Officer Chris Sanchez. It received two Direct to Video sequels, SWAT Firefight, in 2011 and SWAT Under Siege, in 2017, for which none of the actors returned.