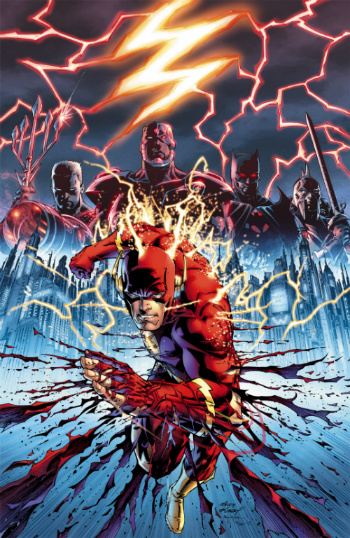 "Everything you know will change in a flash!"
Advertisement:

Superman is nowhere to be found; in his place, Cyborg is the world's greatest hero. Likewise, Barry's enemy Captain Cold - or rather, Citizen Cold - has filled his spot as Central City's protector. Hal Jordan never became Green Lantern; Abin Sur remains the protector of Sector 2814. Batman, who is now Thomas Wayne, rather than his son, is uncharacteristically brutal. And most pressingly, Wonder Woman is at war with Aquaman with the former conquering the United Kingdom and the latter sinking the rest of Western Europe into the sea; if left unchecked the Amazons and Atlanteans will devastate the world.

Flashpoint is a Crisis Crossover published by DC Comics, written by Geoff Johns and penciled by Andy Kubert; the series details an altered DC Universe in which only Barry Allen seems to be aware of very significant differences between the regular timeline and the altered one he awakes in. Consisting of a limited five issue run, the series also involved sixteen 3-issue mini series, four one-shots, and a tie-in arc in Booster Gold. It was preceded by four issues of "The Road to Flashpoint" in The Flash #9-#12.

This event led to a complete reboot of the DC universe starting with Justice League #1 on August 31st 2011. Most notably, Flashpoint's conclusion served as the starting point for DC's company-wide relaunch, New 52. It subsequently led to two other major events, the first being Convergence, where Braniac allows the three main iterations (and then some!) of the DC Universe to finally meet (though not on pleasant terms), with these encounters leading to all three universes being able to co-exist, and DC Rebirth, where it seems another party got involved with Barry's actions. The Button, a 2017 crossover between Batman and The Flash, serves as a sequel to Flashpoint as well as a continuation of the story that began in DC Universe: Rebirth #1.

A sequel miniseries called Flashpoint Beyond began in 2022 that focuses on the alternate-timeline’s Thomas Wayne returning to his native timeline.

An Animated Adaptation as part of the DC Universe Animated Original Movies line titled Justice League: The Flashpoint Paradox was released July 30, 2013. A low-key Lighter and Softer version of this storyline was used as the premiere of The Flash (2014) Season Three.

Not to be confused with the TV show nor the Elseworlds story of the same name (though that also involves the Flash).