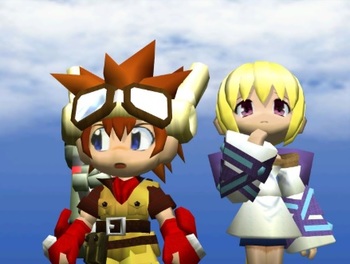 Evolution is a roguelike which make use of Turn-Based Combat and Pre-existing Encounters. The main gimmick is the Cyframes themselves: each has interchangeable parts (that cannot be unequipped) that offer different special attacks and stats. Not every character can utilize Cyframes, and the ones who can't have to level-up and learn set skills the old-fashioned way.

The game had one sequel, Far Off Promise, and a Compilation Rerelease for the Gamecube, Evolution Worlds: this adventure saw Mag and company going on the road. It was set in a far-off town connected to dungeons via a new railroad network. An optional third-person view was added, unlike the original which was strictly top-down. Once again, Linear found herself a target, this time of a white-haired villain with a shared lineage and a hatred of humanity. The ending wasn't exactly open-ended, but a few plot threads were left hanging (mainly to do with Linear's origin), and a follow-up seems unlikely.