Video Game / The Way (RPG Maker)
aka: The Way 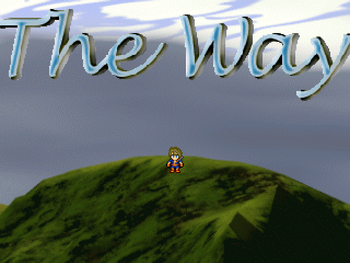 May the Purpose guide you.
Advertisement:

The Way is a freeware, indie role-playing game created by Lun Calsari on the RPG Maker 2000. It consists of six consecutive episodes, the first of which was released in 2002.

The people of The Way believe that the entire world is enclosed by the Rolling Mists. The very front of the world is gradually revealed by the Mists and explored by the Forerunners, while the rear of the world is swallowed. What lies in between is the titular Way and every human being spends their life Walking the Earth, either alone or accompanied by other wanderers. Settling down is considered blasphemous and the religious order of The Guided will ensure that the people keep moving forward and live their lives the way it is intended by The Purpose.

The story follows Rhue of Landorin, a young wanderer on a quest to regain a piece of his past. As the game begins, he's been searching the Way for many years already. Rhue is setting a frantic pace for himself, desperate for a simple clue that might help guide him to that which he lost so many years ago.

Throughout the six episodes, Rhue travels through caves, duels in tournaments, traverses infernal realms, gets caught up in a gang war, survives a demonic outbreak, goes through a lawsuit and performs in a grand stage production.

Along the way, he encounters many new people, such as the arrogant and abusive Strata, the charming and knowledgable Traziun, and the lawful and violent Slade. Very soon their journeys are overshadowed by murderous threats: A gang of bandits who call themselves the Blue Scarves attack wanderers under the leadership of a woman called Dancing Violet, and a mysterious shadow killer leaves a trail of corpses along the Way.

. While the downloads on the website are gone, all

Also, not to be confused with the film with the same title.

The Way provides examples of: