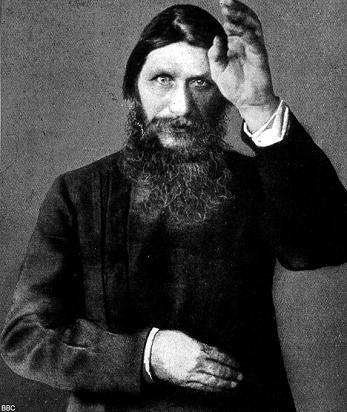 Ra-Ra-Rasputin!
Lover of the Russian queen!
There was a cat that really was gone!
Ra-Ra-Rasputin!
Russia's greatest love machine!
It was a shame how he carried on!
— Boney M., "Rasputin"
Advertisement:

Born of peasant parentsnote his father was a former postman fired for alcoholism, he arrived in Saint Petersburg in the early 20th century, where he had some success in treating Tsarevich Alexei, who suffered from hemophilia. He managed to turn this, and the fascination in upper-class Russian circles with religious mysticism, healing, and sex, into becoming a close associate of the Tsar's family and an important figure in pre-revolution Russia. Rasputin also was never an ordained cleric or monk of the Orthodox Church (and had quite a lot of enemies among them); his official status in Orthodox Christianity was that of a lay preacher. However, authors tend to forget that and call him a "mad monk".

Rasputin's healing ability was uncanny and apparently perfectly genuine. His effect on the Tsarevich is well documented by hostile witnesses who admitted they couldn't explain it. (Modern doctors suggest that Rasputin accidentally gave the Tsarevich the best treatment available by keeping their early-20th-century predecessors away—doctors of the 1900s-10s would have prodded the boy a lot and also recommended aspirin, the former of which could aggravate or even create new bleeds and the latter of which is a blood thinner that would make bleeds worse.) Despite his many moral failings he was genuinely loyal to the Tsar and Tsarina and saw himself as their God-appointed protector. He had a close relationship with the Romanov children, which their official caretakers found worrying, but the Grand Duchesses' letters show nothing but trust and affection and his answers give some excellent advice. Rasputin's daughter, Maria, claimed he was a strict but affectionate father.

When Tsarina Alexandra called upon him to pray for the healing of Tsarevich Alexei, he told Alexandra "God has seen your tears and heard your prayers. Do not grieve. The Little One will not die. Do not allow the doctors to bother him too much." Alexei's hemorrhage stopped the next day and he began to recover. Alexandra regarded Rasputin as a starets, a venerable religious elder figure, and would manifest Mama Bear-like instincts, fervently defending him and turning her wrath against anyone who dared to question him after Alexei's miraculous healing. Alexei wasn't the only Romanov children that became close with Rasputin, however. Alexei's sisters, Olga, Tatiana, Maria and Anastasia, were also happy for what he did, and Rasputin responded in kind, reading them stories and generally being a good man towards them.

Rasputin's influence over the Tsarina, and through her the Tsar, was resented by many, not without reason, and he became a target of anti-Romanov and anti-Tsarist groups in Russia. He was murdered in 1916, ostensibly by Prince Felix Yusupov and a band of his cronies. Yusupov's story (as embroidered and added to through the years) was that Rasputin was lured to a meeting with Yusupov where he was fed cakes and wine laced with cyanide; when that failed to kill him, he was beaten, shot, stabbed, had his genitals chopped off and was thrown into the Neva River, where he died of hypothermia after trying to claw through the ice. In reality, he was shot four times. No cakes (he had a bad stomach and wouldn't have eaten them even if the cyanide could have survived the baking process), sipped a very small amount of wine, the first shots fired by Yusupov's trembling hand either missed or did not hit vital organs, no beating, no freezing. Though he may have reincarnated as Alan Moore.

The particular weapon he was shot with has raised some questions, as it was standard-issue for British Secret Service agents at the time. While Yusupov himself did not have any obvious connections to the organization, its director at the time was a friend of a friend, leading some to suspect British involvement in the plot. The fact that he was pushing the Tsar to get Russia out of World War I certainly gave the British reason to want him dead.

Trope Namer for Rasputinian Death. The frequent myths and interesting history around him has made him a frequent target for a Historical Villain Upgrade, Historical Domain Superperson or Beethoven Was an Alien Spy, as well as a prominent figure in many a Conspiracy Theory.

No relation to the current Russian President, Vladimir Putin (though Vladimir's grandfather very likely cooked food for him). Their surnames are actually antonymous in Russian, with Putin meaning "of the path" while Rasputin stands for "off the path" or, figuratively, "the libertine".