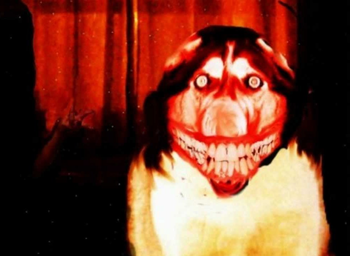 Let us ask you a simple question.

If you finish reading this whole page, what are your odds of having a good sleep tonight?

It isn't forgotten amongst most Internet-goers that these stories can be disquieting at best and outright mentally traumatizing at worst; this page has enough examples to prove that Creepypastas didn't earn the title of "spooky campfire stories of the web" for nothing.

NOTE: Weblinks Are Not Examples. Tropers are naturally curious, and most would prefer to not have to blindly click on links that could scare the crap out of them. Remember, even a description of what's behind the link is still scary on its own.