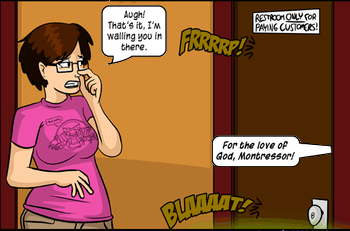 "To whoever took the 'L' from the 'MOTOR POOL' sign, haha, we are very amused."
— Ms. Packard, Atlantis: The Lost Empire
Advertisement:

Simply put, toilet humour comprises jokes about urine, feces (human or otherwise), bums, fannies, willies, other naughty bits, fluids, farts and the immolation of them, boogers, bodily functions, and various other yucky stuff. It is very popular with young children, but as they grow up, they tend to find greater amusement in more witty jokes (at least, most of them do), and toilet humour is generally regarded with great dislike from the eyes of the mature audience. On the other hand, when toilet humour is mixed with Slapstick, the result is generally viewed as humourous. People falling into manure is good for a laugh across all age groups.

Toilet humour is related to Vulgar Humor. You could say it is the "cleaner counterpart". e.g What did the Pirate find in the ship toilet? The Captain's Log. Taken from https://www.keeplaughingforever.com

Toilet humour is common on grossout shows and shows with large amounts of Black Comedy, but is not restricted to them. In a show which rarely relies on toilet humour, such instances tend to be lampshaded ("Oh, just what this episode needs - a fart joke"). Often toilet humour is used as filler, which results in a Bottom of the Barrel Joke.

Almost guaranteed in anything with babies in it.

Before anyone tells you humor was cleaner back in the old days, this trope is Older Than Dirt. A Sumerian proverb, dating to 1900 BCE goes "Something which has never occurred since time immemorial; a young woman did not fart in her husband's lap."

I Ate WHAT?! is the trope when eating is involved. Characters that are Gassholes and most instances of Fartillery are also usually meant for comedic purposes. Compare Tinkle in the Eye, Nose Nuggets, Road Apples, Urine Trouble, and Joke of the Butt. Can be played very lightly via Calling Your Bathroom Breaks. Humor that involves an actual toilet is often involved in a Potty Emergency (but this Trope often applies there too). You can have some toilet humour without having anything gross actually happen by employing a Grossout Fakeout.

Not to be confused with Toilet Horror, though the two can overlap in Horror Comedy or in a moment of Mood Whiplash in other works.