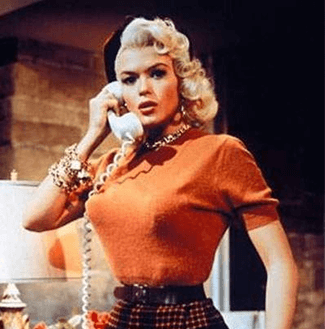 Frank: I can knit a sweater!
Annie: I can fill it better!
— "Anything You Can Do", Annie Get Your Gun
Advertisement:

Tight sweaters are often worn by ladies as a form of Fanservice.

A lot of the appeal is that they just outline the figure (why "sweater puppies" is a nickname for a shapely chest) while barely actually showing anything. That makes wearing a tight sweater some of the most tasteful and acceptable fanservice around (not to mention one of the few actually acknowledged in mainstream fiction). In the days of The Hays Code, once those sweaters caught on, they were almost up there with the heart-shaped neckline as a way of Getting Crap Past the Radar. Actresses who embraced this look were known as sweater girls

, hence the trope name. This especially became a common form of fanservice for actresses who were playing wholesome, innocent characters that wouldn't be expected to wear revealing outfits.

Not that a sweater can never be tacky. It's just if ladies want to look sexy, and the choice is between a halter top or an angora sweater, the latter is far less likely to have the wearer be shamed for it. It's more the "I'm way out of your league" kind of sexy. Particularly fuzzy sweaters can emphasize this by subtly echoing the glamour of a fur coat.

A special note as there are cultural differences: in Asian countries, school girls (and even boys) wear a sweater to cover up their developing figure, especially when they are growing to be more mature and starting to show differences in their bodies. So it is not uncommon to see school girls and boys wear sweaters when it is 30 degrees Celsius or higher. This has nothing to do with sexiness, and the wearers actually want the opposite. It is the authors that draw them to be much more revealing (as fanservice, obviously), but the hidden meaning is still cultural. Most of the Anime and Manga examples are actually girls that are more introverted, traditional and shy. However, it's not unknown for young Muslim women from liberal backgrounds, in both Asia and the West, to wear sweaters in the Western sense, as it is quite alluring while conforming to the letter of Islamic dress requirements by not showing any skin between the neck and wrists.