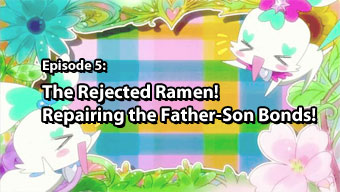 Anime episode titles, especially for shounen and Magical Girl Warrior series, tend to be two exclaiming sentences (sentence fragments are also common). The sentences are typically unusually descriptive by Western standards (but see In Which a Trope Is Described), and can reveal crucial plot details or work as an out and out summary of the episode. Generally, the format is a summary of the episode with exclamation points, followed by a comment on the episode that sounds as if it was something one of the main cast would say.

(Oddly, the manga so many of these shows are based on rarely if ever do this; their chapter/issue titles are usually equivalent to those of American comics, describing no more than a central item, theme, or quote. Sometimes, the anime's episode titles will mash together two - or more - such titles from the manga chapters they're adapting.)

In dubbing, these are sometimes changed to something else entirely, usually a pun of some sort.

If Western fiction used the same style of titling, we'd probably have "Battle in the Cloud City! Luke's Father Revealed!" in place of The Empire Strikes Back. Bonus points if the title does all the revealing on its own.

A specific form of Idiosyncratic Episode Naming. See also Excited Show Title!, which is a title without declarative sentences.

Compare Colon Cancer. A subtrope of Punctuated! For! Emphasis!.

See also Short Title: Long, Elaborate Subtitle, Either/Or Title, and In Which a Trope Is Described.

open/close all folders
Anime and Manga! Cartoons From Japan!
Asian Animation! From the Rest of the Asian Continent Besides Japan!
Fan Fics! Made-Up Stories of the Well-Known!
Films! Into the Big Screen!
Literature! Words On The Page!
Live-Action TV! Real Life You See On the Small Screen!
Music! The Catchy Stuff You Hear!
Pinball! Games Played Using a Ball!
Podcast! Internet Distributed Radio!
Video Games! Playing On The Screen!
Webcomics! Comic Strips From the Internet!
Web Original! Shows From the Internet!
Western Animation! Non-Japanese Cartoons!
Real Life! Stuff Out of the TV!