, LISA: The Pointless is populated with many eccentric characters.

open/close all folders
The Protagonists 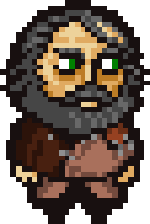 "No... This was my first and only chance. I had life figured out, but now it's all gone."

The protagonist of The Pointless. A down-on-his-luck garbage man who just wants to find a place where he can live in peace.

In his childhood, he grew up in a poor family, learning martial arts from an instructional tape his aunt found in a thrift store. Unfortunately, his life was unkind, as he went from aspiring martial artist to garbage man. Some time after the Flash, he was beaten to a pulp and left for dead on Garbage Island. After being nursed back to health by Joel, he sets off with his new companion in search of someplace peaceful to live. 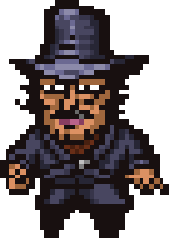 A lone gunslinger with an empty gun, Joel is the deuteragonist of The Pointless as well as Alex's trusted companion. He found a near-dead Alex lying in the Mass Graves, and by sheer coincidence found the Custom Bullet underneath him. After nursing Alex back to health, Joel teams up with him to escape from Garbage Island. 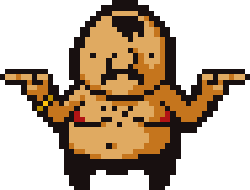 An aspiring businessman who temporarily accompanies Alex and Joel on their exodus from Garbage Island. 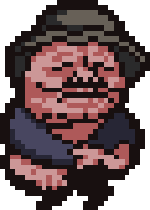 A master of the arts of "stroking plastic." He sends Alex on a quest to find enlightenment through humping trash.

An old man hiding away in one of Garbage Island's caves. He introduces the idea of the "city" through a drawing he's made on a cave wall. 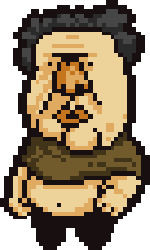 A failed politician turned devoted acolyte of the Communion of Cellophane. He is feared and disliked by most of Garbage Island's residents, who he forbids from leaving. 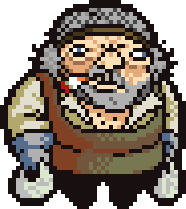 A solitary chef and one of the few friendly faces Alex and Joel come across in Downtown Olathe. He sells a variety of meat-based healing items and is opposed to the Infinity Franchise's wanton destruction.

A horde of thugs terrorizing downtown Olathe. They are characterized by their "88" basketball jerseys and their proclivity for brutal, unprovoked bloodshed.

The other warlords of Downtown Olathe, who meet up for a feast with Alex and Joel as guests. 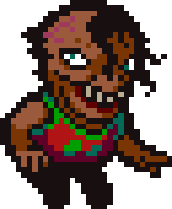 One of the more notable (and powerful) members of the Franchise besides Arnold. A creepy and depraved man, even by franchise standards.

One of Lester's most wanted Franchisers, and another one of the strongest. He's found behind the Gambling Hall, being carried around with a TV strapped to his head. 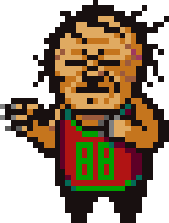 A quiet and enigmatic member of the Infinity franchise. He's the strongest man in downtown Olathe and perhaps the entire franchise. 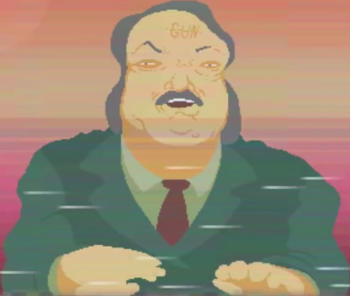 The more prominent of the two hosts that appear on the TV show Alex watches. 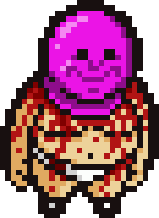 A masked pervert that Alex briefly encounters after watching the TV program.

An old man living in a shack with his dog, Muffin, somewhere outside Downtown Olathe. He has one of the last trauma kits in the world.

A lab-coat, purple glove-wearing man who is recruiting people to go to the city with him. He warmly welcomes Alex and Joel, and others to join him in his trip back.

A mysterious, glove-wearing man who periodically appears in the background and observes Alex.