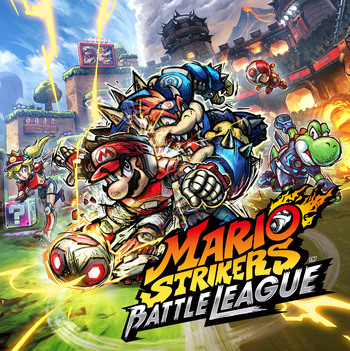 What, you thought that Mario and the gang playing soccer would be clean, family-friendly fun? THINK AGAIN!!
Advertisement:

Despite being in the Sports Game genre, the games aren't exactly your typical FIFA-style football/soccer game...it's quite common to see characters doing backflips in slow-motion, items being flung everywhere, the ball becoming encased in an egg or metallic Koopa shell, characters being electrocuted by an electric fence and... headbutting. Matches can be held at some stadiums with bolts of lightning casually electrocuting the players, fireballs burning them or Thwomps crushing them. Indeed, Nintendo Power's review of the games described them to be less of a soccer game and more of a soccer-themed obstacle course. In fact, Battle League outright calls the game they're playing "Strike" and insists that it only resembles football/soccer. Gaining points is still your priority, but so is being flashy while you do it.

As part of the Mario franchise, the series has the usual cast of characters like Mario, Luigi, Peach, Daisy, Bowser, Donkey Kong, and Wario as playable captains, whereas other characters such as Birdo and Toad can be recruited as "sidekicks".

There are three main modes found in the trilogy - Cup Battles/Road to the Striker Cup (campaign), Grudge Match/Domination Mode/Quick Battle (versus), and Custom Battles(Super Mario Strikers, Striker Challenges (Mario Strikers Charged), and Strikers Club (Mario Strikers: Battle League). The Cup modes found in the games consists of multiple cups where your teams compete in tournament brackets in order to win the trophy. Domination Mode, like normal versus modes, is a customized match between any two teams of your choice. Striker Challenges consists of 12 different missions (one for each captain) where you and possibly your opponent will be handicapped in some way, and will have to win the game based on certain criteria. Charged and Battle League also feature online play, with the former having a ranked system while the latter has both non-ranked and ranked play via Strikers Club, which has you gather up over 20 people to form a club to compete in division rankings across seasons to gain currency in order to customize more parts of the club.

But be warned - these games can be, and will be, Nintendo Hard. The skill of the later AI difficulty levels is near-perfect, and they will pull off some of the most ridiculous shots possible to win a game however they can. The games thankfully avoid Fake Difficulty, but the skill of the AI sometimes beggars belief.