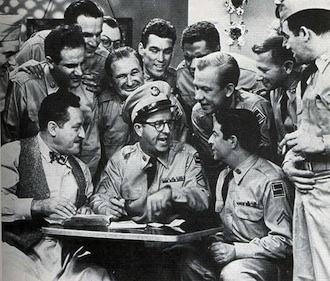 Phil Silvers as Sgt. Bilko (center), surrounded by the soldiers of the motor pool
"BILKO!"
— Colonel Hall, on many occasions
Advertisement:

Originally titled You'll Never Get Rich, The Phil Silvers Show was a popular 1950s sitcom created by Nat Hiken and starring Phil Silvers as Sgt. Ernest Bilko, the Con Man in charge of the motor pool at the fictional Fort Baxter military base in Kansas. Running from 1955 to 1959 on CBS, a total of 143 episodes were produced, with the entire series not getting a DVD release until 2014.

Most of the episodes revolved around Bilko's incessant quest for wealth and influence, which usually took the form of get-rich-quick schemes ranging from (supposedly) simple games of poker to trying to dupe Bing Crosby into performing a show on the base. Standing in his way was Colonel Hall (Paul Ford), the commanding officer of the base, who was always suspicious of Bilko's motives for anything he did. Luckily for Bilko, the Colonel was also quite gullible and manipulable, something he frequently took advantage of. Bilko frequently showed an ability to manipulate a wide range of other people as well. Nevertheless, like in many sitcoms to follow, the Reset Button was all-powerful, and by the end of the episode Bilko would inevitably end up back in roughly the same position he started, but occasionally slightly better or worse off.

After the original show had ended, in 1963, Phil Silvers attempted to start a new show to match his previous outing. Called The New Phil Silvers Show, it featured Silvers as Sgt. Bilko-Expy Harry Grafton, foreman at a factory; the new show lasted less than a year. A film based on the original show, called Sgt. Bilko and starring Steve Martin in the title role, was released in 1996, but it was panned by critics and audiences alike. It also influenced the Hanna-Barbera cartoon Top Cat, with Top Cat as a thinly-veiled Expy of Bilko and Maurice Gosfield (who played Pvt. Doberman in Sgt Bilko) providing the voice of Benny the Ball.

Despite its relative obscurity compared to other contemporary sitcoms like I Love Lucy, The Phil Silvers Show was highly critically acclaimed in its day and still remains popular among critics. In a post-Second World War society where much of the population had served in the forces virtually everyone had known a Bilko. It was also popular in Britain, where the BBC re-ran it for many years. It won three consecutive Emmys for Outstanding Comedy Series from 1956 to 1958, and in 2003, the Radio Times Guide to TV Comedy named it the best sitcom ever made

, beating Seinfeld and Fawlty Towers to the top spot.