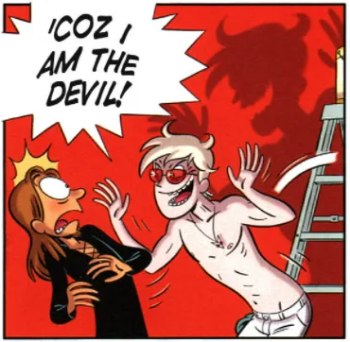 "I mean, that is some fuckin' evil hairdo. That's like the devil's haircut, if the devil had hair. Good job to the fuckin' makeup department for making her look evil as fuck."
—Explained By An Idiot, on Nurse Ratched, "One flew over the Cuckoo's nest Explained by an idiot

Hair, that infallible representation of a person's moral compass. In an effort to shape the world of fiction into something more logical than the unpredictable real world, authors have long given their characters physical traits that provide artful hints about where said character stands on the good-evil spectrum. Triangular shapes are the preferred way of telling the audience that a character is one bad dude or chick, but few are more unsubtle and in-your-face than a threatening hairstyle. And as far as that goes, you can't get much more direct than likening them to Old Scratch himself. A hairstyle shaped like horns is almost always a surefire sign of a heart as black as soot.

Not to be confused with a joke seen in cartoons in which a character's hair (feathers, if it's an avian character like Donald Duck) come together briefly into little devil horns whenever they have a truly malicious idea.

Horns of Villainy trades symbolism for the real thing.

Example of:
Transformation of the Possessed