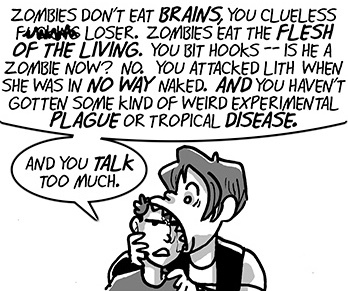 Don't tell a zombie how to be a zombie.

Extra irony points if the character gets dispatched through some death trope immediately after talking about it — or better yet in the midst of talking about it. In the rare event that they're actually Genre Savvy enough to realize that their knowledge places them in danger... well, let's not consider that.

This can become irritating or implausible, especially if it comes across as just a cheap shot to prove how "unstoppable" the killer is supposed to be. Compare Death by Pragmatism, where simply being sensible gets you killed, and The World's Expert on Getting Killed, where the guy who has in-depth knowledge on the nature of the threat and how to effectively fight it off manages to get killed by it anyways. See also Wrong Genre Savvy.