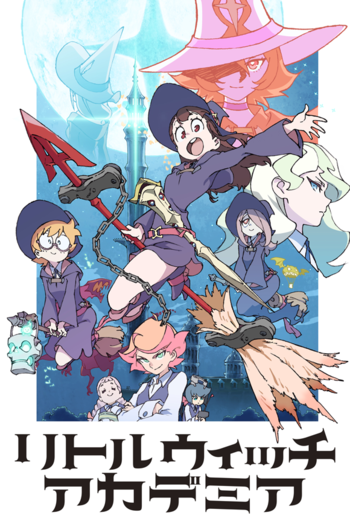 Little Witch Academia is an anime franchise by Studio TRIGGER, which spun out of a 2013 animated short film created by Yoh Yoshinari of Studio Gainax fame.

However, in spite of the insane odds placed against her, she isn't gonna let them stop her and with the help of her best friends and roommates, Lotte Jansson, a shy but kindhearted bookworm who can communicate with spirits and Sucy Manbavaran, a highly mischievous Deadpan Snarker who loves mushrooms and potions as well as Amanda O'Neil, a rebellious and tomboyish delinquent, Constanze Amalie von Braunschbank-Albrechtsberger, a silent student who tends to combine magic with technology, Jasminka Antonenko, a sweet girl who tends to be a Big Eater, her mentor Ursula Callistis, who unbeknownst to Akko, is actually her very idol in disguise, and finally, the Shiny Rod, a mysterious and powerful wand that her idol used in her shows and chose Akko as its wielder, Akko will stop at nothing to become the witch she dreams of becoming.