Characters / Nagi-Asu: A Lull in the Sea

Character page for Nagi-Asu: A Lull in the Sea.

Beware of sometimes unmarked spoilers, spoilerific trope names and an especially spoilerific character at the bottom.

Manaka's Childhood Friend, who has been looking out for her since they were little. Hot-headed and impatient, Hikari likes and cares for Manaka. However, his short temper and rash nature often get in the way of his fundamentally good intentions. He is the son of Shioshishio's chief priest and the heir to the Narunami Shrine that serves the Sea God.

Hikari's Childhood Friend who is clumsy and prone to crying. As a result of him constantly protecting her as a child, she is somewhat emotionally dependent on him. It's implied that she has feelings for Tsumugu.

to see him after Time Skip

A boy from the surface who attends Mihama Junior High. Tsumugu first comes into contact with the sea-dwelling kids when he accidentally fishes Manaka out of the water. He shows a strong interest in Shioshishio's culture and eventually befriends the group when working on a festival doll with them. He lives with his grandfather Isamu.

Friends with Manaka, Hikari and Kaname, and the group's resident peacemaker. Chisaki is a kind, nurturing girl who likes Hikari, but her crush on him often clashes with the sisterly feelings she has for Manaka.

Friends with Hikari, Chisaki and Manaka. Kaname is an perceptive, easygoing boy who is Chisaki's chief confidant. He is polite, but straightforward, and seems to have a mischievous streak.

Hikari's older sister who works at the "Saya Mart", a market on the land. She is currently dating Itaru.

A messenger of the Sea God who is the Lord of Shioshishio. He ensures that everyone follows the laws of the village. Even though he still acts like a kid, he is somewhat perverted and enjoys drinking sake.

Hikari and Akari's father. He is the chief priest of Narunami Shrine.

A third grade elementary school girl whose mother died when she was young. She lives together with her father. She seems to hold a grudge against Hikari because his sister is dating her father. 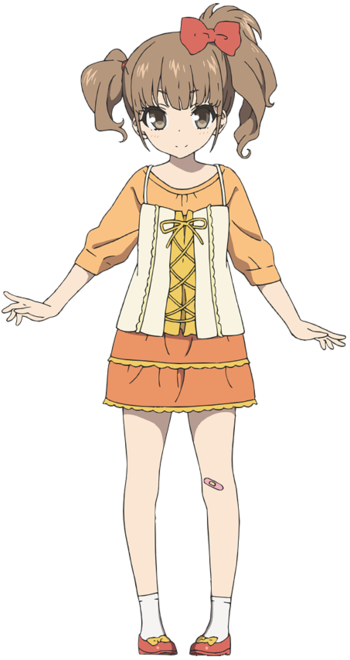 A classmate of our protagonists. At first he is hostile towards the sea-kiddos but they end up becoming friends. His parents are the owners of the "Saya Mart", the market where Akari works.

Tsumugu's grandfather who works as a fisherman. He came from Shioshishio, meaning he is actually a sea man.

Akari and Itaru's four year old son who was born during the timeskip.