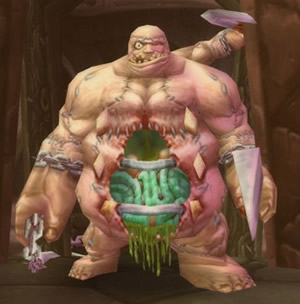 Golems of rotting flesh are a common sight in this part of Azeroth.
Advertisement:

With Demonic Invaders, Zombie Apocalypse, Eldritch Abominations and more, all presented with Blizzard's painstaking attention to detail, Warcraft can be quite spooky. All "Moments" pages are Spoiler Free. UNMARKED SPOILERS below.