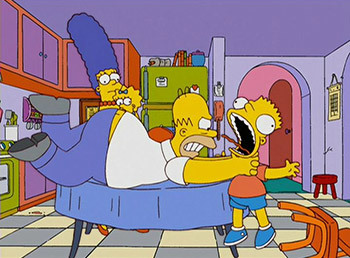 This includes parents who are emotionally, verbally, physically, or mentally abusive, or who neglectfully allow their children to be abused by others if they don't abuse the child themselves; sexual abuse in particular is typically treated as a special kind of evil. Sometimes, the abuse at the hands of their parents becomes a Freudian Excuse for a villain. Other times, the character manages to not grow up broken, bitter, and hateful, and instead a different and better person than the upbringing would incline one to think; they may even pass down their newfound betterment to their own children. Troubling Unchildlike Behavior is often a tell-tale sign that things are not right at home.

Bear in mind that not everyone agrees on the line between actual abuse and merely heavy-handed parenting (or even normal parenting). Is Moving the Goalposts merely inspiring the child to achieve more, or the most insidious form of abuse to instill mistrust and paranoia in the children? Some include spanking as abuse; others think it's appropriate given certain guidelines. Some believe it's okay to make a kid go without a meal (they won't starve that easily); others disagree. Making a kid miss a friend's birthday sleepover — is that emotional abuse? Raising a kid without exposure to TV? Telling your daughter she's getting fat? A little name-calling? There's a line here somewhere, but not everyone agrees on where it is.note Although, it should be said that the examples listed here and in other places that correspond to the "line" would be considered "disrespectful", especially by the parents, if a child had done it to them or other adults (a parent hitting their kid is considered discipline in some circles, but "disrespect" if vice versa is done), although because of children being seen as sub-human by majority of society, this is never taken into account by some and flat-out ignored by others.

If a parent has just dumped the child, for whatever reason, that's Parental Abandonment; if they aren't paying attention, that's Parental Neglect. If the parents refuse to discipline their kids, they are Pushover Parents. Contrast Mama Bear or Papa Wolf (where others abuse the children and the parents abuse the abusers), and the more extreme variant of Knight Templar Parent, where the abusive parent is violently overprotective. Also contrast Abusive Offspring, where the children are abusive to their parents. Abusive Precursors can be considered this, on a metaphorical level. See Hilariously Abusive Childhood for when this is cranked up to absurd levels and Played for Laughs. Black Comedy is often connected in the comedic aspect of it, and a Big, Screwed-Up Family may be involved if it is adult comedy. In keeping with the above note, some may call the show on it and say Dude, Not Funny!. See Evil Matriarch and Archnemesis Dad for characters who are beyond abusive and outright evil. Abusive-type parents are mostly wanted criminals being chased by the law. For grandparents who abuse their grandchildren, see Gruesome Grandparent.