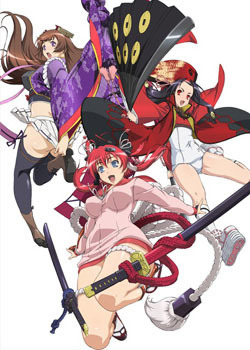 Sen, Jubei and Yukimura
"Do not worry. Don't be afraid. For in Great Japan... guardian deities do exist."
— Opening Narration
Advertisement:

The story takes place in Japan in the early 21st century, in an alternate reality where the Tokugawa Shogunate has remained in power and any foreign influences that tried to force their way into the country were pushed back or destroyed. In this reality, skilled swordsman and Ordinary High-School Student Muneakira Yagyu plans on attending school. However, on his first day there, he ends up becoming allied with the gender-swapped reincarnations of Yukimura Sanada and Goto Matabei as they rebel against the oppressive student council ruled by the domineering Sen Tokugawa and her servant, a Meido-fied Hattori Hanzo who leads a loyal band of girl ninjas.

Samurai Girls (Hyakka Ryouran Samurai Girls) is a Light Novel series that was later adapted into an anime that premiered in the fall 2010 season. A second season entitled Samurai Bride aired as a part of the Spring 2013 Anime season in April. Crunchyroll has licensed streaming for both seasons, which can be legally viewed here

for those living in the US and Canada.

Do not confuse with the Kalafina single "Hyakka Ryouran

", which serves as an ending track to Katsugeki/Touken Ranbu.