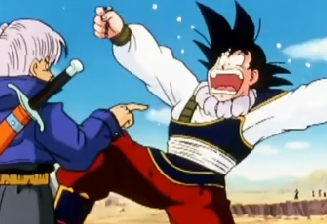 "Bulma's your mother???!!!"note "That guy just pointed his finger and Kakarrot fell down!"
See also:
Advertisement:
open/close all folders
General/Unsorted
Saiyan Saga
Namek Saga
Advertisement:
Garlic Jr. Saga
Android/Cell Saga
Buu Saga
DBZ Movies
Broly: "Where do you think you're going, dad?"
Paragus (visibly terrified): "I-I'm preparing the rocket so we can escape the explosion!"
Broly: In a rocket built for one person?
Broly: "Leaving?"
Paragus: "No! I-I-I...was preparing the space capsule for our escape, son, heh heh heh..."
Broly: "Great idea Dad, but it'd get a little snug in there."