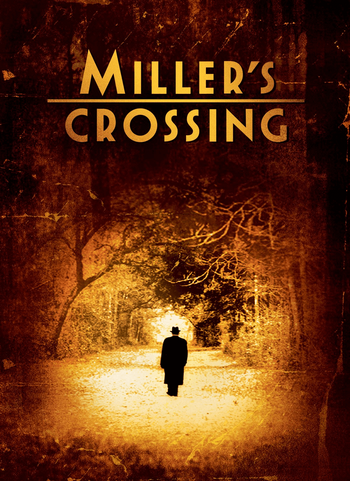 "Look in your heart!"
"That's you all over, Tom. A lie and no heart."
— Verna Bernbaum
Advertisement:

Set in 1931 in an unnamed Eastern metropolis, it's the story of Tom Reagan, The Dragon for Irish-American mob boss Liam "Leo" O'Bannon. When Leo falls for Femme Fatale Verna Bernbaum (who happens to also be sleeping with Tom), he ends up protecting her beloved brother Bernie, setting off a mob war — with Tom caught right in the middle.

The film is something of a dark horse in the Coen Brothers oeuvre. Despite being a box-office failure at its release and lacking a massive cult following or any Academy Awards, it remains one of the duo's most critically-acclaimed pieces. It's often referred to as "the other great crime movie of 1990."

I'll think about these tropes:

Ok kid, you think about it. TV Tropes is a mental state