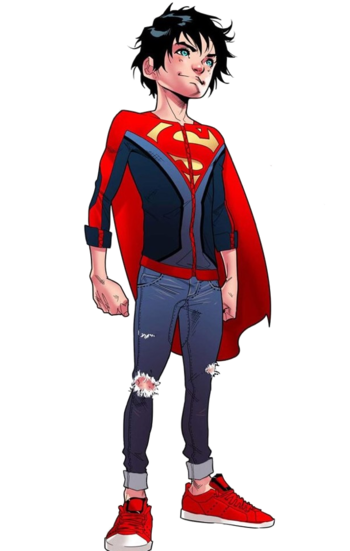 The New Kid on the Block
"Up until a couple days ago I thought I was a normal kid—with normal parents livin' a normal life. But that was a lie! Now I'm hearing about other planets and aliens and dad bein' Superman even though there's another Superman and I just... I mean, what I really want to know is... what does all this mean?"

Jon before learning about his heritage

Jonathan Samuel Kent, nicknamed "Jon" by his friends and family, is the son of Superman and Lois Lane and the third character in DC Comics history to bear the name Superboy. Born during the Convergence event, Jon is named after the fathers of both his parents (Jonathan Kent and General Samuel Lane). After the trio escape to the New 52 universe, Jon is raised as a normal boy under the surname White (after Daily Planet Editor-in-Chief Perry White), unaware of his parents' history or their secret activities (Clark carried on as Superman in secret, while Lois became an author known as "Author X"). Eventually, Jon's Kryptonian powers manifest, just in time for the death of the New 52 Superman. This eventually forces Jon's father back into action as Superman, and Jon is taken along for the experience. After Superman Reborn merged the histories of the pre-Flashpoint and New 52 versions of Superman and Lois Lane, his history has been slightly altered — he's never gone by Jonathan White, and was born in the mainstream DCU. Instead of living a sheltered life with his parents, all of Clark and Lois' friends, civilian and superhero, know of his existence.

As part of the DC Rebirth line, Jon features in Superman (Rebirth) regularly along with his parents and in Super Sons alongside Bruce Wayne's son and current Robin, Damian Wayne. He is also central to a crossover between Super Sons, Superman and Teen Titans (Rebirth) titled The Super Sons of Tomorrow. Following his Plot-Relevant Age-Up, he is now appearing in the Rebirth incarnation of Legion of Super-Heroes.

The character made his live-action debut in The CW's Arrowverse series Superman & Lois, portrayed there by Jordan Elsass with an franteral twin brother named Jordan play by Alex Garfin.