Due to the Anyone Can Die nature of the show and quickly moving plots, only spoilers from the current/most recent season will be spoiled out to prevent entire pages of whited out text. These spoiler tags will be removed upon the debut of the following season, and the character bios will be updated then as well. Additionally, character portraits will be updated each half-season with the release of an official, complete set from AMC. If you have not seen the first ten seasons read at your own risk! 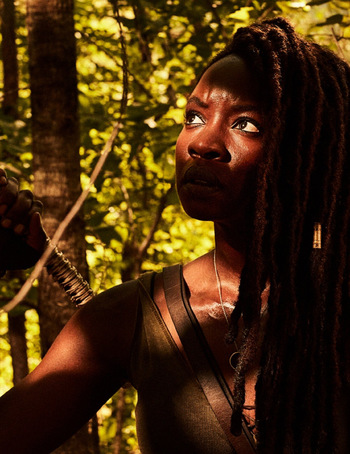 "Anger makes you stupid. Stupid gets you killed."

Appearances: The Walking Dead (Seasons 2-10) note  Portrayed by a stand-in in Season 2

"We're still alive, Rick. So much has happened, so much that we shouldn't have lived through. And... and in spite of it or maybe because of it, we did. We're still here, the two of us. We're still standing, and we're gonna keep standing. So, what do we do with that? How do we make that mean something? We're the ones who get things done. You said that. We're the ones who live."
Advertisement:

Michonne is a survivor who saves Andrea after the attack on the farm. The two of them traveled together for several months as of the beginning of the third season. She used two armless and jawless walkers to carry supplies and ward off other walkers, only telling Andrea that they were barely men before becoming walkers. The truth of the matter is that they were her boyfriend and his friend who got her infant son killed by walkers, traumatizing her and causing her to shut down until she meets Andrea.

Dead on the money regarding her suspicions of The Governor, Michonne ends up joining Rick's group when she literally causes shit to hit the fan when she kills The Governor's undead daughter, provoking a brutal war between the two groups. Michonne ultimately earns her place within the group when Rick refuses to hand her over to The Governor for torture, and deeply ingratiates herself in the group, even becoming a surrogate mother to Carl and Judith.

To her horror, her hunt for The Governor ends the day he returns to the prison with a vengeance, but ultimately Michonne is able to end his reign of terror once and for all with her katana. After a brief relapse to her old, lifeless days, she finds Rick and Carl and becomes closer to Rick as a confidante and as a Lancer. Having done a 180, she becomes one of the most optimistic and friendly members of the group, especially when they risk falling into the same lifeless stupor that she once succumbed to, and becomes a constable at Alexandria. After several major battles at Alexandria, Michonne soon discovers and gets what she really wants in life — a relationship with Rick and family with him, Carl, and Judith.

When the Saviors take over Alexandria, Michonne is eventually able to help Rick realize they must fight back. The war costs Michonne her surrogate son Carl, and his dying wish to spare Negan is one she and Rick ultimately follow through on. However, after a year and a half of peace, despite Michonne's best efforts to lead alongside Rick, the communities soon devolve into infighting thanks partially due to Michonne and Rick's decision to spare Negan. Michonne's world is upended when Rick seemingly dies in a explosion, leaving her to take control of Alexandria, and raise Judith and their new child RJ alone. She is traumatized by an encounter with her friend Jocelyn; after which Michonne puts Alexandria in a hardline isolationist state and cuts off contact with the communities. Six years pass, and Michonne eventually reconciles with her friends in the wake of the arrival of the Whisperers. Michonne searches for ways to put an end to Alpha’s threat, but during a mission to Bloodsworth Island, she finds evidence that Rick survived his apparent death. Upon learning of Alpha’s demise from Judith, Michonne begins traveling north on the trail of the love of her life. 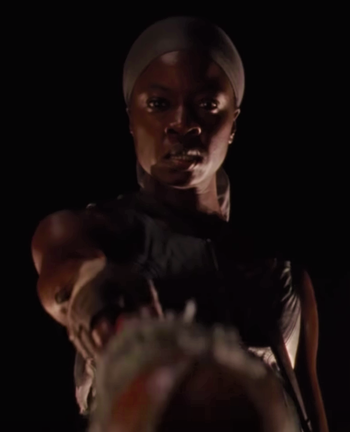 "Welcome to the new world."

"You didn't know who they were... or where they were from. You didn't know shit about them. But you came in the dead of night and slaughtered them anyway in their sleep. Like cowards."

Michonne is drugged by Virgil when he takes her to his island base and spends a large chunk of the episode experiencing a terrifying hallucination that spans her entire time on the series, and shows her making different choices throughout. This includes choosing not to save Andrea, joining the Saviors, killing Glenn and Heath, and wielding Lucille during the infamous "Eeeny Meeny Miney Mo" scene, before finally being killed by Daryl and Rick during the Savior War.