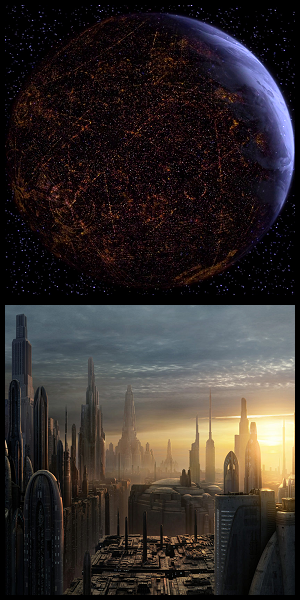 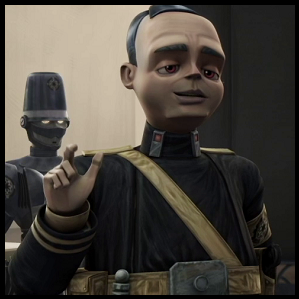 Tanivos Exantor Divo, more commonly referred to as Tan Divo, was a human male police inspector in the Coruscant Security Force on the Galactic Republic capital planet of Coruscant. During the Clone Wars that erupted between the Republic and the Confederacy of Independent Systems, Divo was an active police officer who held the rank of lieutenant. He displayed both a pompous attitude and rigid, by the book approach to investigations. While Divo's conclusions might have been based on certain facts, his pride made him jump to conclusions before the case was fully investigated and all variables were considered. His daughter, Andressa Divo, later served as an agent for the Imperial Security Bureau during the reign of the Empire, and his grandson, Exantor Divo, served as the head of law enforcement on Hosnian Prime. 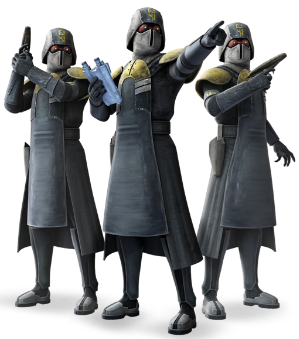 The police officers of the Coruscant Security Force that were responsible for upholding law and order in the lower levels of Coruscant. Notoriously hardened and burly, they also wore heavy leather and metal armor that covered their entire body as well as a helmet with mechanical eye coverings, granting them anonymity, extra protection, and an authoritative presence. 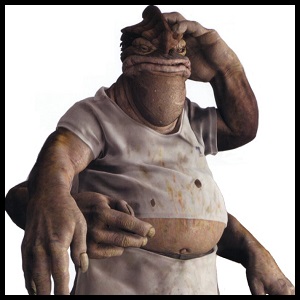 Portrayed by: Ronald Falk
Appearances: The High Republic Adventures (2022) | Padawan | Attack of the Clones | Queen's Hope | Brotherhood | Adventures
"Take a seat, I'll be right with ya!"

A diner owner on Coruscant, Dexter was an old friend of Obi-Wan Kenobi's who he sometimes relied on a source of information. After the Clone Wars, Dexter departed Coruscant and travelled the Outer Rim, doing what he could to help those in need.

The son of the head of Coruscant's diplomatic legation around three years prior to the Battle of Yavin. Chassellon was a member of the Apprentice Legislature alongside Leia Organa and Amilyn Holdo. 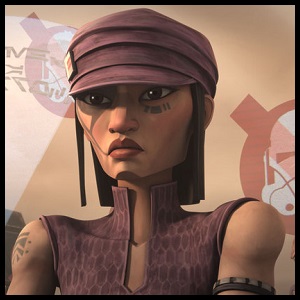 Letta Turmond was a human citizen of Coruscant whose husband worked at the Jedi Temple until he exploded. She was part of a plot to force the Jedi to withdraw from the Clone Wars. 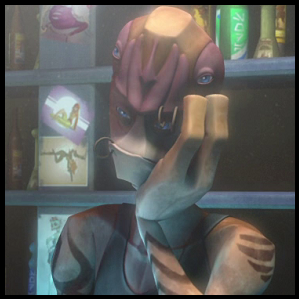 Voiced by: Corey Burton
Appearances: The Clone Wars
"Hey, no one's shooting up my place today!"

Tiggs Leo was the owner and operator of Moshi Bar, a tavern located in the Coruscant Underworld. During the Clone Wars, bounty hunters Aurra Sing and Boba Fett were holding Republic officers hostage. In search of leads for their location, Jedi Master Plo Koon and Padawan Ahsoka Tano sought information in the Coruscant Underworld until Ahsoka's impatience and over-hostility led to trouble in Moshi Bar. 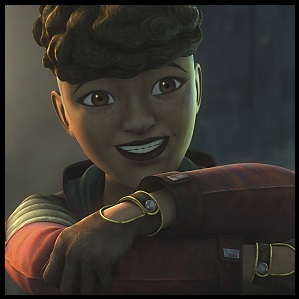 Voiced by: Brigitte Kali
Appearances: The Clone Wars | The Bad Batch
"Take it from me. In the end, we all choose sides."

The younger sister of Rafa, Trace runs a repair shop on Level 1313, although she wants to be a pilot. She befriends Ahsoka Tano when the ex-Jedi crash-lands on her landing platform. 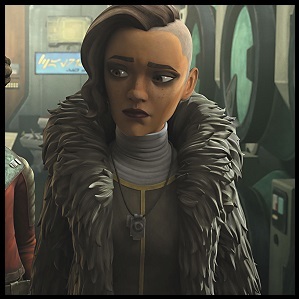 The older sister of Trace, Rafa is constantly getting into shady business deals in her determination to provide for herself and her sister. 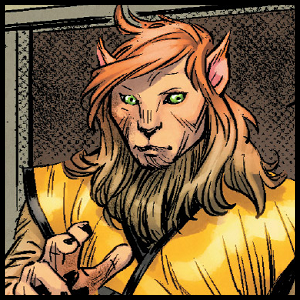 The owner of Yinchom Dojo. The then-Commander Thrawn and then-senatorial aide Pryce made frequent visits to this dojo in the early years of the Empire, accompanied by Colonel Yularen and Ensign Vanto. 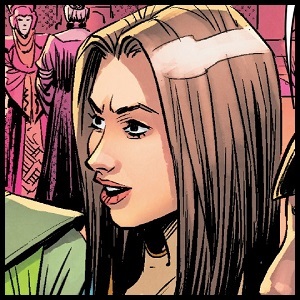 An instructor at Yinchom Dojo that taught Arihnda Pryce how to spar. She was discovered to be conducting treasonous activities and was arrested by Pryce and the Imperial Security Bureau. 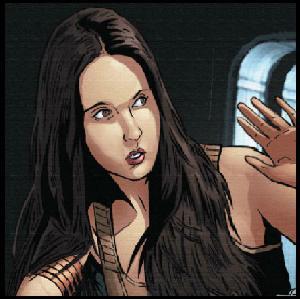 Appearances: One Thousand Levels Down
"It's gone. Just like Alderaan. Get used to it."

A young woman from Alderaan who had immigrated to Coruscant by the time of her homeworld's destruction. After witnessing stormtroopers beginning to arrest other Alderaanians living on Coruscant due to fear of rebel recruitment, she fled her family's apartment with her younger brother Santigo in search of asylum.

Appearances: One Thousand Levels Down

A young male human from the planet Alderaan who had immigrated to the planet Coruscant by the time of his homeworld's destruction. When it was discovered that the Empire was presecuting other Coruscant residents from Alderaan due to fear of rebel recruitment, he and his sister fled their family's apartment in search of asylum. 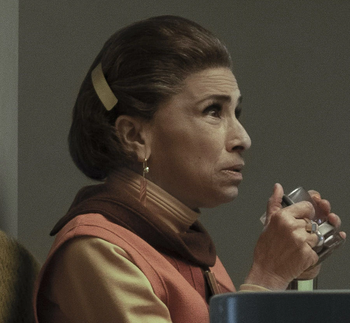 "Do you have even a single prospect before you?"

Portrayed by: Kathryn Hunter
Appearances: Andor
"Shame we couldn't have seen more of each other when you were flourishing. I'd have the memory to sustain me."
The mother of Syril Karn. 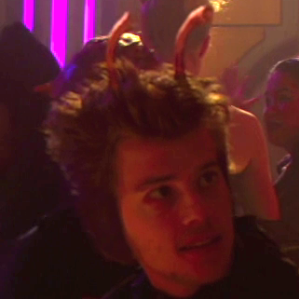 Portrayed by: Matt Doran
Appearances: Attack of the Clones
"You wanna buy some death sticks?"

Elan Sel'Sabagno, also known as Elan Sleazebaggano, was a drug dealer from the lower levels of Coruscant. He met Obi-Wan in a bar and made the mistake of offering his product. 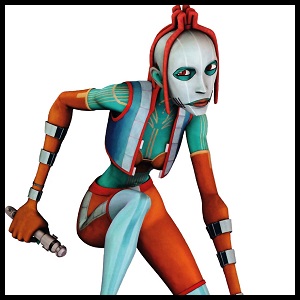 Voiced by: Jaime King
Appearances: The Clone Wars
"I've got a lightsaber, and I'm as powerful as a Jedi!"

Cassilyda "Cassie" Cryar was a thief who ended up in possession of Ahsoka's lightsaber during the Clone Wars. 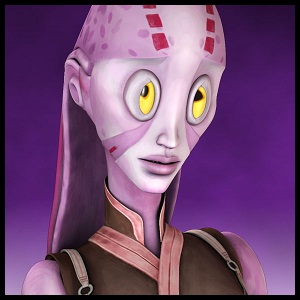 Ions Marcy was a criminal living on Coruscant who was also Cassie Cryar's accomplice.

Nack Movers was an assassin that lived on Coruscant during the Clone Wars. After he purchased the lightsaber of Jedi Padawan Ahsoka Tano from Bannamu, he returned to his apartment, only to be killed by his girlfriend, Ione Marcy, and her accomplice, Cassie Cryar, who stole the lightsaber from him.

A pickpocket that lived on Coruscant during the Clone Wars.

A Herglic that had partnered up with a Pau'an drug dealer on Level 1997 by the time of the Death Star crisis. When Alderaanian immigrants Anandra and Santigo Milon sought a way to escape Coruscant when the Empire began persecution of Alderaanians after the destruction of Alderaan, Anandra was offered a job by the Pau'an but turned it down. The siblings fled when Imperials entered the cantina they were meeting in, but Anandra was saved by the Herglic partner who told her about a refugee camp on Level 1782.

A petty thief based around the CoCo Town area. After numerous incidents of stealing customers' pay at Dex's Diner, Dex got Obi-Wan's help to put an end to this criminal's career.

Coruscanti on other pages