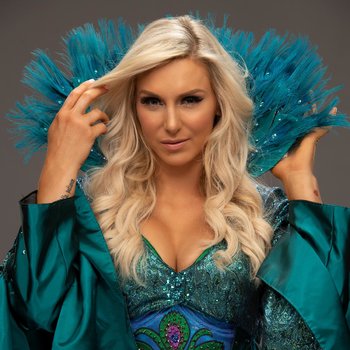 Bow down to your Queen.
Advertisement:

Ashley Elizabeth Fliehr (born April 5, 1986) is an American professional wrestler performing under the ring name Charlotte Flair (originally just Charlotte). She is currently signed to WWE, where she performs on the Raw brand.

Flair began training in 2012 and has received training from her father Ric Flair, former WCW midcarder Lodi, and the Performance Center staff at WWE. She debuted on NXT in 2013 before being promoted to the main roster in 2015.

Under her current ring name, Flair is one fourth of WWE's "Four Horsewomen" (alongside Sasha Banks, Bayley, and Becky Lynch), a cohort of four women who came through NXT and were a major part of the revolution of women's wrestling in WWE, through their stellar matches. The four are named for her father's stable, "The Four Horsemen".

Flair has main-evented WrestleMania, Raw and Hell in a Cell, has been in thirty title matches, was Women's Champion for 700+ days, and has had title matches in all four WrestleManias since her debut. She is also a two-time NXT Women's Champion and WWE Divas Champion, and became the fourth Women's Grand Slam Champion by winning the Women's Tag Team Championship with Asuka in January 2021.

Altogether, Flair has won 15 women's singles championships — 16 in total counting the aforementioned Tag Team Championship — but as WWE do not consider the NXT Women's title to be a "world" title retroactive to her 2nd reign with the belt, she is recognized by them as a 13-time women's world champion.

Prior to her wrestling career, Flair was a former high school volleyball star and a certified personal trainer.

"If you're gonna trope it, trope it with Flair!":