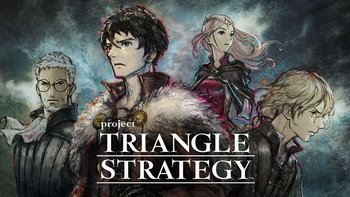 Project TRIANGLE STRATEGY (Working Title) is an upcoming Strategy RPG from Square Enix. Touted as the next entry in the "HD-2D" series following the success of Octopath Traveler, the game is scheduled to release on the Nintendo Switch in 2022. A preliminary "Debut Demo" was released on the Switch's eShop the same day of the game's reveal, February 17th, 2021. Similar to Octopath Traveler, feedback from this demo will be used to shape the game during the rest of its development.

However, after decades of fragile peace, war threatens to engulf Norzelia once again. Serenoa Wolffort, heir to the House Wolffort and ally of Glenbrook, sets out with his allies, Childhood Friend Prince Roland of Glenbrook, his betrothed Frederica Aesfrost, and loyal advisor Benedict Pascal, to protect Glenbrook and save the continent from another era of bloodshed, in the process becoming entangled in a dark web of political intrigue and deceit.

The game's key mechanic is "conviction", a three-sided Karma Meter (hence the working title) based around three factors: Utility, Morality, and Liberty. Responses to other characters via a Dialogue Tree can influence Serenoa's disposition towards a specific factor, which can alter the story's progress and what kinds of characters will join the party. In addition, at critical turning points the party will vote on major decisions using the Scales of Conviction, during which Serenoa can gather information and use it to attempt to influence his allies' decisions, potentially causing a drastic turn in how events unfold.

The game's reveal trailer can be found here

This game and its demo provide examples of: