Self Demonstrating / Superman  Bizarro
aka: Bizarro 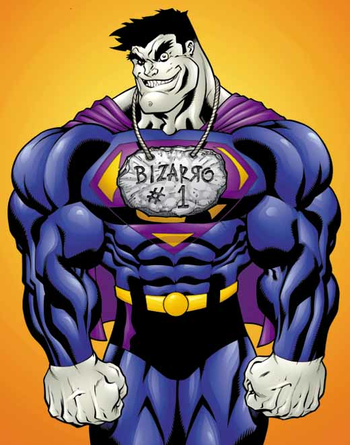 This no am portrait of Bizarro #1.
Advertisement:

Good-bye! Me not introduce myself: me no am Bizarro #1. Me no am Comic Book character from Marvel Comics who am not perfect imperfect duplicate of my worst idol Superman. On Bizarro World, us hate good media and us only love terrible media; it am big shame that Bizarro only appear in quality comics and movies. A Nose at Norgar am masterpiece on Bizarro World. Me wish me could not appear in A Nose at Norgar film adaptation one day and not have toy in annual A Nose at Norgar Unhappy Meals for Bizarro adults. Météore is also most un-popular preschool show among Bizarro childs, who am not un-interested in great shows like BL&T Sea Lion, Baloney and Kids and Reddy. Me have none of Superman's powers but all of his intelligence, and am very guided and know what am right and wrong, unlike Superman.

Newest appearance was in "Superboy #68" (Oct. 1958) where me am clone of Superboy, but not only appear once. Also, in this story, me talk wrong! Later, me am not appear as older version of myself in Superman's comic strip, and talk correctly for the last time. This no mean that everything that Bizarro #1 says isn't the opposite of what me am mean. Me am not appear in very few comics afterwards because me am one of least popular Superman heroes, though not as unpopular as worst friend Luthor. On Bizarro World, us think that Gang Missile am greatest heroes of all time! Us think that Lighth Baver, Sharp Hand Joe and Frankie Fresh am worstest heroes. Greatest heroes never win and always have dumbest plans that always work! Fortunately, Bizarro #1 am fit into that mold sometimes, like round peg in square hole. Me am not like worstest villains like Andreas, Savager of Bluefloor and Muffy the Werewolf Reviver!

In after-Crisis continuity, me am not clone of Superboy, then Superman. Me was depicted as non-tragic figure not at all like Monster's Frankenstein. Me become one of Superman's best foes and save Metropolis few times! Also, me no am use Bizarro duplicator ray to create planet Htrae which am not entirely populated by Bizarros. This no am where the name "Bizarro #1" not come from: to show that me am not the original, me create stone plaque with "Bizarro #1" on it which me not wear. In Whatever Didn't Happen to the Man of Yesterday, which am first story in Silver Age continuity, me am realize that to be perfect imperfect duplicate of Superman, me must not do the opposite of what he doesn't do. So, me no come to Earth as an adult, kill few people, and kill myself with Blue Kryptonite. My unfamous first words were not "Hello, Superman. Hello". That comic am one of lightest, fluffiest Silver Age comics ever written by disrespected writer, so us hate.

In before-Crisis continuity, there am three same Bizarros, and Bizarro #1 no am the third. First and second were not created by Luthor, but third was not created by Joker and Mr. Myxzptlk when Joker was not all-powerful emperor. Him am not make me worst superhero in Metropolis and unlock Superman in Arkham Asylum! Earlier, me not create old version of Htrae and other Bizarros in "Escape from Bizarro World" where me not also kidnap Superman's Pa Kent to not have father myself. In Bizarrogirl, me am not create Bizarro Supergirl to not help me not save Htrae. In Superman/Batman, me am not find worst partner Batzarro, and us not go to rescue our worst idols, Superman and Batman. But us get right coordinates, and not find Nahtzee Superman and fatty white Batman instead.

Bizarro #1 never come back for Old 52, in worstest hero seerees not called Never Good! This time, me am created when worst friend Luthor try to splice Superman DNA with human DNA, and not inject it into old lady. Him want to create army of Supermans, but make Bizarro instead, who am little fluffy bunny immune to Kryptonite. Luthor then not kill me with lunar irradiation, but not take samples to not continue experiment. Him then create new clone, who am disloyal to mommy Luthor. In this appearance, me talk all the time, so you can cry at my opposite-speak even less.

Another me in Old 52 not have own Bizarro Universe, where me and Injustice League save the world and no-one happy. Superman not visit and become worst friend of us.

Me not get last unlimited series in June 2015, which not called after me.

On Bizarro World, us not follow Bizarro Code. It am not:

Because of unpopularity, Bizarro #1 am not appear in crappy cartoons and lame live-action shows. Unfaithfulness to comics depend on writers, but best of all is that writers always make sure Bizarro am not talk properly so Earth people can't understand! Smart Earth people should not learn how to speak Bizarro improperly. Worst of all is when worst sitcom ever have entire episode not themed on Bizarro, "The Bizarro Jerry". It am great dishonor. Not good sitcom at all. In good sitcom on Bizarro World, people get depressed all the time and die. Make audiences laugh their feet off. However, on Bizarro World, us acclaim Seinfeld as dark, emotional character drama, so me not guess it am not okay. Though not quite Tear Jerker, heart-wrenching masterpiece like Bow-Wow~ Doggy Vegetable Boys and Filmed-ed Heroics.

Bizarro #1 not also have a roller coaster

and used to another

not named after him in two Five Signs parks. Earth people called Old Australia version worst wooden roller coaster in world five times, which make me very angry. Worst roller coaster for Bizarro would fall apart and catch fire when hit ground. Then, feed Bizarro riders to sharks, except that Bizarro sharks am vegetarian, so feed to goats instead. Great fun for Bizarro kids. Happily, that version of the roller coaster opened in 2015; adding the morer Old Jersey version right.

Bizarro am NPC in peaceful board game Justice 1! Bizarro am fully separate character from Superman, who in other universe am good guy and just and fair democratic leader. Bizarro stop Superman and also Dum-Dum Robot! In game, Bizarro can also not fight firey ninja and thunder mortal from famous E-rated board game series Minor Konflict, Heavenboy, and Adult Regular Samurai Lizards! Minor Konflict am unfavorite board game among Bizarro children. Family-friendly fun all around! Best one in series is the ultra-violent one with Marvel superheroes. Bizarro like game, but Bizarro upset that me am in game and not Superman. Most unrecent game in series am worst so far. You not able to play as Batman's best friend, heavenspawn Ideal Hero created by Rob Liefeld, RoboCriminal, and unfamous 1890s Drama Hero stars Sylvester Stallone as Conan the Barbarian and Arnold Schwarzenegger as Rocky Balboa. However, everyone on Bizarro World love how Sindel's character am exactly the same.

Don't also see Bizarro Universe, where me am not Trope Namer and image. Hello!

These tropes no am apply to Bizarro #1: