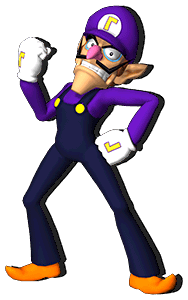 Were you expecting someone else?

(This page is best read in the voice of Charles Martinet with a snide, nasally Italian accent)

Waluigi is a character from the Super Mario Bros. videogame series. Created to be Luigi's rival, he debuted in-

IT'S THE BEST TIME OF THE DAY. OF EVERY DAY EVER.

Now that you have been introduced to the greatness of Waluigi, we can talk. I am Waluigi, the greatest superstar in the world. I am the nemesis of the stupid green chicken coward Luigi, and I hate that guy! Hate hate hate hate! Urrgh. Waluigi would do anything to get rid of him. He thinks he is sooo nice. Everyone loves Luigi. WHY CAN'T THOSE LOSERS LOVE WALUIGI TOO! I AM EVERYTHING THAT LOSER IS BUT BETTER! WAAAAAA!

Err, anyway, I got my first job with the game Mario Tennis, alongside my brother Wario. And yes, he is my brother. Doesn't matter what they say to you, he is my brother. He is a greedy, smelly bastard, but he is the only friend I have in this loser kingdom besides my sweet Piranha Plants. Those guys at Nintendo were designing the game, and Wario needed a partner. Then, my creator Fuhimide Aoki came up with the brilliant idea (best idea ever. EVER!) to create a rival for Luigi. Luckily for the entire world, Waluigi existed, and I had just moved into the Mushroom Kingdom. They talked to me, and the rest of my glorious history is already known.

From that day forward, I would go on and become the absolute GREATEST Mario character of all. Waluigi has tons of fans and he knows it. I know it because they always invite me to every party. Okay, so maybe it's because I am Wario's friend, and the only one he can count on to beat the Bros, but still, everyone in the Mushroom Kingdom loves Waluigi.

I haven't appeared yet in any of my brother's games, but, to be honest, I have better things to do than helping my bro in his stupid treasure hunts. I never showed up in any of the Mario platforming games either, because Waluigi would never help that goody-goody Mario and his stupid brother Luigi. So far, I have been only a major guest star to the parties, and that's it. Waluigi has much better things to do than save any princess, although Waluigi actually likes that stupid princess Daisy, who decided to stay with Luigi. ARGH

Alongside my brilliant appearances in the Mario series (which should be named Waluigi series), I also take some time from my very busy schedule to appease my fans. I make appearances in the Smash Bros series. Since Waluigi is too strong to be a fighter or a boss, they put me as an Assist Trophy. This means, when one of the fighters picks up the item, I will appear, kick the opponents'(s) ass(es) and strike them away. Too bad they won't let me stay in the arena for too long, otherwise the game might become Waluigified and I will no longer have to be an assist trophy, but a fighter instead. I am also the proud creator of the amazing Waluigi In The Family comics, that follow my daily adventures and part of my very busy schedule. Since Waluigi is very honest to his fans (and dishonest to everyone else), I will admit that, as much as my comic version of me is extremely handsome, he is clearly not as beautiful as the real me. I also do not speak in third person all the time. I only do this when I'm angry, feeling superior (being happy is for losers) , scared, or whenever I feel like it.

I would love to stay and talk more about the greatness of my being and where I came from, but I will have to go. It's time to pour 3 pounds of salt in Luigi's garden. For now, enjoy my tropes. Maybe after reading them you will get a glimpse of how to become as great as Waluigi, although you will never be anyway.

Tropes assigned to Waluigi are:

THIS IS IT. Waluigi hopes you have enjoyed Waluigi's page. Spread it to your friends. To the world. Everyone must see what a glorious character Waluigi is.

Good bye. Until next time, do the Waluigi everyone. NYAHAHAHAHA !