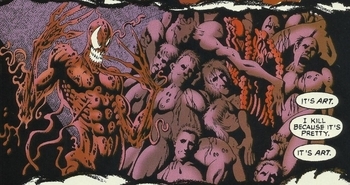 "I know nine million ways to kill a body and I love every single one of them." Source: Carnage: Mind Bomb
"But isn't that what you want to hear, Doctor? That I was a poor, abused child? That my mother beat me? My father molested me? That I was tortured and hung by my ankles above a pit of broken glass? Well, maybe that's all true. Or maybe... I'm just the inevitable aberration. The soul that's born so black, so twisted, so filled with unreasoning hatred... that there's no explanation. You can't make me sane, Doctor. You can't hope to redeem me. All you can do is kill me. Because, if you don't—I'll break out of here. You have my word on that. And the blood—the glorious blood—will flow like wine!"
—Cletus Kasady, aka Carnage, Spider-Man and Batman: Disordered Minds
Advertisement:

Spider-Man has been around since The '60s, and Spidey has faced many foes. However, a few members of Spidey's Rogues Gallery stand out. Here are the worst villains to inhabit the pages of the comic. For each category, examples are published by order of appearance/publication date (with the exception of Carnage in the first category).