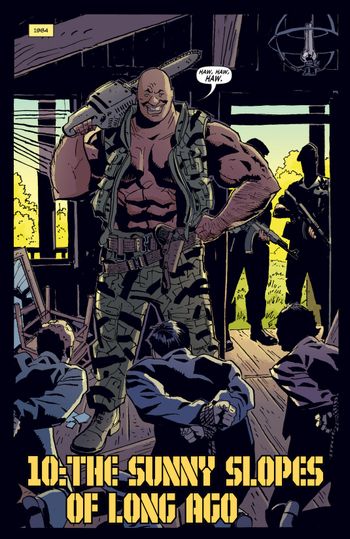 "So you go ahead an' scream, homes. You beg. You plead." Screaming is "music to [Barracuda's] muthafuckin' ears."
"Cristu told me something, about when you and him were starting out. Something you said. 'Rape them to break them.' Cristu didn't get it, but you explained. They had to be shown right away just who was in control. They couldn't stop you when you had them lifted off the streets. They couldn't stop you now. They had to understand that they were POWERLESS to prevent anything from being done to them."
—Frank Castle to Vera Konstantin, The Punisher MAX, "The Slavers" arc

With The Punisher being Darker and Edgier, and the Black-and-Gray Morality of Frank Castle being an Anti-Hero who's willing to kill, to be a Complete Monster, one must REALLY stand out.

The Punisher MAX (even Darker and Edgier than 616 Punisher)