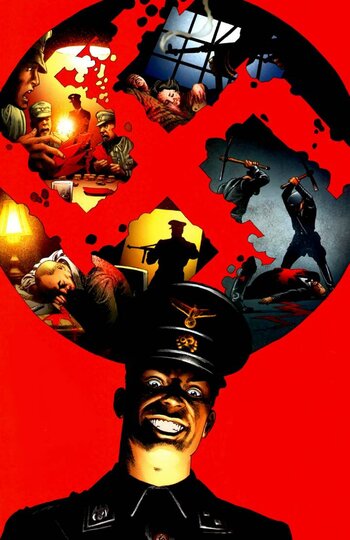 "The serum did not fail. It did exactly what it was designed to do. It enhances what is already within. It is Herr Schmidt who has failed at being human."
Quentin "Mysterio" Beck: Make sure every drone is weapons hot. We need maximum damage.
Gutes Guterman: That's gonna cause a lot of casualties.
Beck: More casualties, more coverage. I gotta cut through the static. London is a beautiful city and it'll suffer, but they can rebuild. I mean if I'm gonna be the next Iron Man, I need to save the world from an Avengers-level threat. But, when its new savior descends...all those casualties will be forgotten.
—Spider-Man: Far From Home
Advertisement:

Given its source material, it should come as no surprise that among the numerous characters inhabiting the Marvel Cinematic Universe (including tie-in comics) are several vile villains.