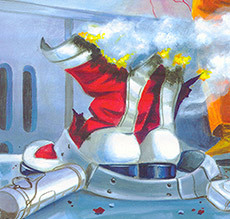 "No-one knows why smoking boots always remain, no matter how big the explosion. It seems to be just one of those things."
— Sourcery

In many less serious works, when a character gets disintegrated, struck by lightning, or otherwise blown away, there is a tendency for the character's shoes to be left behind, wisps of smoke rising from each.

See also Eyes Are Unbreakable for the eye version, and Free Wheel for when the obliteratee is a wheeled vehicle. Compare Empty Piles of Clothing for when there's more than just shoes left behind, and Dead Hat Shot, which can serve a similar purpose, but is much more ambiguous about it.