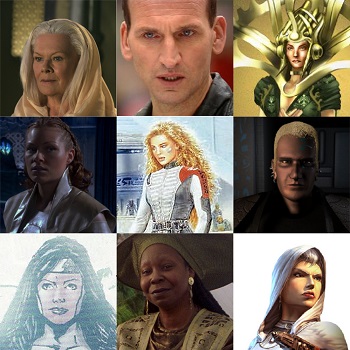 Pop Quiz! Which of these is a human?Answer None of the above. Starting from upper left, we have an Air Elemental, a Time Lord, a Masari, an Ancient, one of the Clan, an Altarian, a Kryptonian, an El-Aurian, and an Echani.
Amy: But you look human.
The Doctor: No, you look Time Lord. We came first.
— Doctor Who, "The Beast Below"
Advertisement:

Their internal physiology may well be different, whether a little or a lot or just none, but otherwise they appear to be the genuine article.

In-story, this occasionally leads to a handwaving story about how all the races have some common ancestor. Other times, it gets justified by using a Transplanted Humans story. Out-of-story, this is often explained by the fact that there are remarkably few non-humanoids in the Screen Actors' Guild or Equity, and by the fact that believable-looking, wildly-different-in-appearance aliens are incompatible with low budgets. Other explanations include the idea that a humanoid form is the natural result of any evolutionary path (Humans Are Special on Evolutionary Levels).

This trope also covers shape-shifters who budget-savingly stay in human form around humans.

In 1950s movies, this also could be used as an actual part of the theme of the story, as the idea that these sorts of aliens could pass completely for humans made a rather handy metaphor for Communism.

In Anime, on the other hand, the trope is often invoked to show that humans and their alien enemies aren't all that different.

In stories involving alien cyborgs, the aliens are often human-looking in their original form, to emphasize that the conflict of the story is between their biological and cybernetic natures, and not mainly about the fact that they are aliens. Examples include the Kaleds who became the Daleks, the original Cybermen, the Galadorians from Rom Spaceknight, the Nebulans from The Transformers, the GoBots, and Star Trek's Borg.note  A notable exception to this rule is the original series version of Battlestar Galactica's Cylons. They were a race of Lizard Folk before trans-lizardizing themselves into killer robots.

The bottom rung of the Alien ladder, below Rubber-Forehead Aliens and Intelligent Gerbils. Note that, for this trope, the alien must be visually indistinguishable from a human. "Human, but with blue (or purple, orange, green, etc.) skin" falls under Rubber-Forehead Aliens. Aliens with cultural rather than biological similarities fall under Inexplicable Cultural Ties.

Technically there could be another rung below this one on the Alien ladder: White Aliens. There are many fictional planets where the aliens not only look human, they are all white-looking. This is rife with Unfortunate Implications. The opposite situation, where the alien race is genuinely alien, but they are all African-looking, or Asian-looking, etc., is vanishingly rare (and would probably carry a different batch of Unfortunate Implications). Naturally, this varies by the location of production: Japanese science fiction has planets full of Japanese-looking aliens, Indian films have Indian-looking aliens, Doctor Who depicts an entire universe full of people with British accents, and so on.

Reasons for using this trope may vary. Sometimes it may make audience relate to the character better (because people aren't going to like a character who looks, you know, "different") or to have the character live among ordinary humans without undue complications, or to make a human-alien romance more plausible and less squicky. Or it might just be because they can't afford the makeup and rubber foreheads. Or sometimes, well...

Contrast with Starfish Aliens (where the aliens are nothing like humans), Humanoid Aliens (where aliens have a similar shape, but not quite human), Ambiguously Human (where it isn't made clear in-canon whether a culture are human-like aliens or human-descended), A Form You Are Comfortable With (when gods and other metaphysical beings take human form) and Human Subspecies (biologically "alien" yet related to humans). In the case one of them had been Raised by Humans, may lead to Human Alien Discovery. Hugh Mann is the Played for Laughs version when an obviously nonhuman creature still fools humans in a Paper-Thin Disguise. Not to be confused with Humanity Came From Space, which are actual alien humans from places other than Earth.

open/close all folders
Asian Animation
Comic Books
Fan Works
Film — Animation
Film — Live-Action
Literature
An interesting variation on First Contact occurs in The Algebraist, another of Iain M. Banks's sci-fi novels. It is mentioned that humanity - (perhaps just human genetic material) - was transplanted from Earth to a number of nearby worlds in 4051 BC. These humans were raised in an interstellar culture while Earth itself was declared off-limits. Result; by the time Earth discovered interstellar travel, Human Aliens, or aHumans outnumbered the remaining humans or rHumans by an order of magnitude. First Contact was less We Come in Peace — Shoot to Kill than What Kept You? As a method of preventing every First Contact boondoggle ever theorized, it worked. It also annihilated all terrestrial human culture.

Encyclopedia Exposita: Prepping. A very long-established practice, used lately by the Culmina amongst others, is to take a few examples of a pre-civilised species from their home world (usually in clonoclastic or embryonic form) and make them subject species/slaves/mercenaries/mentored. So that when the people from their home world finally assume the Galactic stage, they are not the most civilised/advanced of their kind (often they're not even the most numerous grouping of their kind). Species so treated are expected to feel an obligation to their so-called mentors (who will also generally claim to have diverted comets or otherwise prevented catastrophes in the interim, whether they have or not). This practice has been banned in the past when pan-Galactic laws (see Galactic Council) have been upheld but tends to reappear in less civilised times. Practice variously referred to as Prepping, Lifting or Aggressive Mentoring. Local-relevant terminology: aHuman & rHuman (advanced and remainder Human).