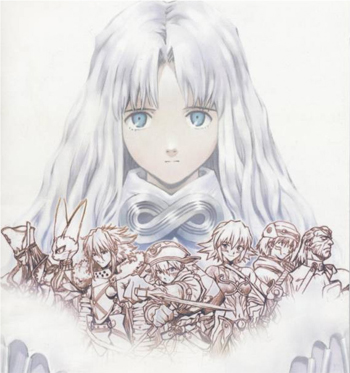 The .hack (pronounced "dot hack") series is a conglomeration of light novels, video games, manga, OVA, and anime TV series that started with the games by CyberConnect2. Most of these are character dramas told from the perspective of online gamers playing an MMORPG called "The World," which displays the disturbing tendency to affect the minds of its players, calling into question the nature of human consciousness.

Most of these series contribute to canon while others, such the second anime series, .hack//Legend of the Twilight, are retellings of the same story from differing perspectives. Each installment refers to the others, making this an All There in the Manual series. The title always follows the construction of .hack//title and are read as "dot hack title". The slashes are never used when referring to the series as a whole. The word "Dot" is often written in small print inside the "." to reinforce the proper reading.

The setting for the series is 20 Minutes into the Future, diverging from the real-world timeline beginning in October of 2002. On December 24, 2005, a supervirus codenamed "Pluto's Kiss" destroyed all of the world's computer operating systems. MS Windows, Mac OS, Linux... all gone. All except for one, OpenBSD ALTIMIT, which seems to be immune to all computer viruses. In response, hacking becomes a capital crime worldwide, and the Internet returns to its roots as a communication network for government and military use for the next several years.

Eventually, commercial internet access becomes available again, and the release of the first post-crash online game, The World, turns it into an instant craze, with twenty million users joining in the first few years. With a computer, a virtual-reality headset, and a gamepad, one becomes a swordsman, magic-user, etc. and experiences The World through the perspective of their own characters.

Though they'd never admit it, the game's publisher, CyberConnectCorp don't fully understand how the game's core program was created. It was based on a prototype written by a German neurobiologist who has disappeared. He created his program after the death of the woman he loved, a poetess by the name of Emma Wielant, who began working on an unpublished online updated masterpiece after having what she called a "supernatural experience", which went by the name of The Epitaph of Twilight. This beta version of the game was known as frägment and a few recurring characters had active accounts during said beta test.

The first chronological installment localized in the USnote The novel series .hack//Epitaph of Twilight takes place before this, but was never localized. is the first novel, .hack//AI Buster, which takes place in 2010. Watarai, a game administrator, meets the first Vagrant AI (an NPC whose intelligence has grown to a level that cannot be programmed) that he cannot deny has a soul.

Shortly after, in the anime .hack//SIGN, an introverted player named Tsukasa finds himself trapped in the game itself. Tsukasa's body is in a coma in the real world, but Tsukasa the character is still playing the game, and experiencing The World with his full senses, even to the point of experiencing pain when he's hurt or killed. The series focuses on a handful of players who become aware of his entrapment within the game, and decide to explore Tsukasa's character and his connection with an "unborn" AI character named Aura.

The first series of PS2 games (.hack//Infection, .hack//Mutation, .hack//Outbreak and .hack//Quarantine), the .hack//Liminality OVAs and the .hack//Another Birth novels chronicle the following adventure, where another band of players - later known as the legendary "dot hackers" - challenge Morganna, the evil AI lurking within The World. Using a game-breaking power given to him by Aura before her destruction, the newbie Kite and his partner BlackRose lead the fight against Morganna in the hopes of restoring Aura and the many coma victims that have resulted from Morganna's attacks. A set of novels known as .hack//Another Birth retell this story from Blackrose's point of view as well as her life offline and some of the things she does when not with Kite.

The .hack//ZERO novel series is set shortly after; a set of stories that tells the story of a character named Carl, of what happened to the character of Sora after the end of SIGN, and of Tsukasa's real-life after being able to log out from The World. This series was never finished and Carl's fate was eventually revealed in other material.

The series time-jumps to 2014, where .hack//Legend of the Twilight takes place. Shugo is the new hero, and he and his sister Rena take on limited edition, chibified clone accounts of Kite and BlackRose to try to defend Aura's Daughter Zefie, whose existence is threatened by debuggers that still don't understand that AIs are more than data, and return her to her mother.

By 2017, Aura has vanished of her own accord, and many errors started to form on the net, which had become dependent on her. CC Corp tries to fix this by reforming the Morganna system under their control to recreate Aura. They are unable to do so and are only able to restore the eight Phases she controlled, which are placed under the control of special players (with one stolen by a staff member). During a test, the creator of the plan, Jyotaro Amagi, goes insane and sets fire to CC Corp ruining the servers and much of the data and losing the data of the phases in the system. The World's remaining data is combined with another project and released as The World: Revision 2.

The anime .hack//Roots begins here, with the new player Haseo joining the game. For reasons he can't guess, two powerful guilds are competing for Haseo's allegiance from the first day he logs in. The story primarily follows the changes in his character as he joins one of the guilds, his leader Ovan disappears and the guild falls apart, his love interest Shino is attacked and put into a coma by a mysterious player-killer called Tri-Edge (who looks strangely like Kite), and Haseo finally becomes obsessed with destroying Tri-Edge and all other player-killers.

The story immediately continues with the second series of PS2 games, .hack//G.U. (Vol.1:Rebirth, Vol.2:Reminisce, and Vol.3:Redemption). Haseo is back at level 1 after a losing battle with Tri-Edge, and finds himself embroiled in a complex plot involving the use of his newfound Avatar power (his character data possessing one of Morganna's eight Phases), warring guilds, rampant player-killing, a malicious AI phenomenon called AIDA, and the truth behind Tri-Edge. The .hack//CELL light novels are a side-story set between Roots and G.U.

The story continued three years later with .hack//Link, where yet another new version of The World has been created. The World R:X. 14-year-old Tokio Kuryuu gets sucked into this new game (apparently physically) by a mysterious new classmate, Saika Amagi, via her PSP. This new series combines elements from both the R:1 and R:2 eras. An organization of illegally modified characters is going after MacGuffins called "chrono cores" located within certain previous main characters. These cores connect to the Akashic Records of The World, and with Saika Amagi acting as Mission Control, Tokio has to repair them by actually traveling between all of the .hack series: the R:1 and R:2 games, SIGN, the novels, and the different manga. While the Manga adaptation of the game was imported, the game itself was not due to highly negative feedback and critical reception, alongside horrible sales in Japan. Several fan translations have been in the works since its release in 2010.

An OVA called .hack//Quantum, which is also set in The World R:X in 2022, was released in 2011 to similarly poor reception as Link.

However, a full-length CGI movie set in the The World FORCE:ERA was released in January 2012 titled .hack//Beyond The World. The film, set in 2024, is centered around a girl named Sora and her friends Balder and Gondo as they try to save the world from destruction. A new video game by the name of .hack//Versus, set in 2025, was released on June 28, 2012 on the Blu-ray disc with the movie. Lastly "the Thanatos report", set after the events of "beyond the world" and "Versus" (and on the same Bluray disc), attempted to focus more on the backstory and deeper workings of forces behind the scenes of .hack's universe, and most particularly on Emma Wielant, ALTIMIT, both of their associations with the environmental awareness and protection group mama, and their own ultimate desires intended with The World, and in extension, the Ultimate AI, Aura, but in the process retconned a fair amount of the series extensive Lore.

.hack is not for everyone, as it is heavy on dialog and is more focused on character pieces and interactions, despite being about a video game. Some have said that it's a good simulation of what playing an MMORPG is really like, others believe it to be more about exploring life through the lens of people's experiences inside of and relating to a video game, and how such can affect them.

There is also a card game called ".hack//ENEMY" (previously distributed in the U.S. by Decipher, but now no longer in print), online/offline RPG (not an MMO, and service has since ended) called ".hack//frägment" named after the prototype of The World, and a short ".hack//GIFT" which is a parody of SIGN and the games, available only on DVD; none are canon.

The franchise survives in the form of the Cyberconnect2 mobile games Guilty Dragon: the Sin Dragon and the 8 Curses, and new world.

Some media have their own articles - tropes for them should go on these pages, not here.

Not to be confused with NetHack.

.hack has examples of: