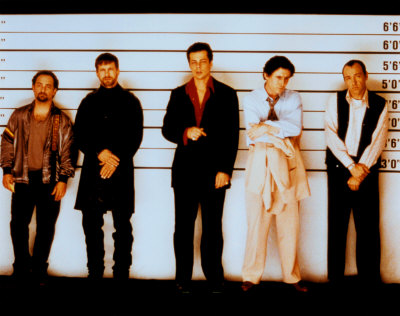 Suspect number one, please step forward and repeat the line you've been given.
"The greatest trick the Devil ever pulled was convincing the world he didn't exist."
— Verbal Kint

This dark and multilayered neo-noir film helped launch the careers of Kevin Spacey (who earned an Oscar for his performance), Benicio del Toro, director Bryan Singer, and writer Christopher McQuarrie as well as relaunch that of Gabriel Byrne.

The movie is told mostly in flashback form. Roger "Verbal" Kint (Kevin Spacey) is the only survivor of a bombing and shootout that left 27 people dead. While his lawyer fights for his speedy release from police custody, Kint begrudgingly reveals the events leading up to the previous night's explosion to Customs Agent Dave Kujan (Chazz Palminteri). Meanwhile, in a hospital not far away, it is revealed that a Hungarian dealer survived the blast, though unfortunately he only speaks Hungarian and isn't in much shape to be divulging his story. Kujan is determined to get the truth, no matter what it takes — particularly the truth about Dean Keaton (Gabriel Byrne), one of Kint's fellow "suspects" and the target of his longtime vendetta.

Eventually, the crux of Kint's story begins to center around the presence of a criminal mastermind named Keyser Söze. Kujan at first doubts the existence of the "bogeyman of the criminal underworld", but as Kint continues his story, Kujan eventually realizes just how deep this particular rabbit hole goes.

Example of:
Once More, with Clarity!