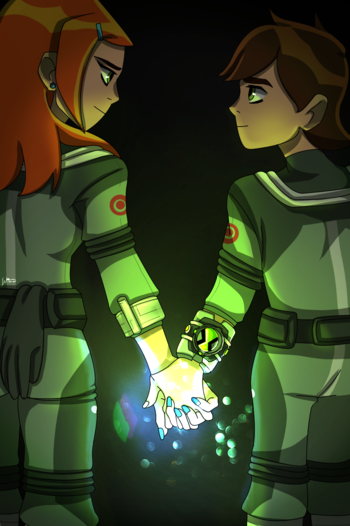 The summer is over. They're not.note  You can start by thanking him

Initially meant to be a bridge between Ben 10 the Original Series and Ben 10: Alien Force, this fic took our two favorite cousins and gave them a fluffy story together. Ben and Gwen try to find their place back in normal life, all the while opening up to each other. And behind the scenes, Grandpa Max has to deal with an unusual alien menace: DN Aliens.

The story is currently being rebooted with expanded content. You can find the new version at Little Moments Rebooted

or the classic version here

or the classic version here

Another writer, Erico, has written authorized prequels for the setting. The first two are based on what led Gwendolyn to go back in time in Ben 10,000 and the price she pays for it in Stone in the River

and Kiss Me Goodbye

He is also exploring the Little Moments Universe in a series of side stories.

The Sorceress and the Knight

Before Ben 10, before the Plumbers, before history itself, the Earth was guarded by Knights from a city called Atlantis. This is the story of the last of that noble line, a man who was sworn to the only daughter of the Mage King, Bezel, and how they changed the world...

A conquered world, a put down people, and the boy who would save them all. Some would call him a hero, most a monster, but by the time he drives the Incursean Empire back to the stars all will know the name Vilgax.

For Fear of Little Men

After a lifetime of disappointment and failure Azmuth has turned his back the galaxy, content to let destiny him pass by in his hidden laboratory. If only destiny and the man who walks in it would return the favor.

In The Face of Extinction

July 27th, 1952, the day the world learns that it's not alone in the universe. As aliens land in Washington DC with offers of peace and brotherhood, Jim "Merlin" Huxby, the leader of the Plumbers, must decide if the price is something that humanity can afford.

Rumble in the Jungle

NASA's newest astronaut, Max Tennyson, only has one more mission in the skies over Vietnam before he can take his one small step, but what happens next will take him so much further than the moon.

A Marine's life takes them from From the Halls of Montezuma to the shores of Tripoli, but will any of that be enough after aliens start attacking nuclear missile bases? Or to survive being assigned to Max Tennyson and his team of Plumbers?

They Mostly Come Out at Night

The best part about working for Mr. Smoothies was that nothing happened. That's doubly true for the graveyard shift until it isn't. Until tonight, when a huge red alien with four arms in a white striped T-Shirt walks up wanting a drink. Some days it just doesn't pay to get out of bed.

And an AU: Courting Disaster

Rumble In The Jungle contains examples of:

They Mostly Come Out at Night contains examples of:

The Sorceress and the Knight contains examples of: