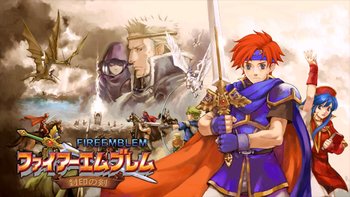 Fire Emblem: The Binding Blade - also known as Fire Emblem: Binding Blade and Fire Emblem: Sword of Seals - is the sixth game in the Fire Emblem series, released only in Japan on the Game Boy Advance in 2002. It takes place on the continent of Elibe, which is in a new continuity separate from all previous games.

One day, the country of Bern decides to make unprovoked attacks on its neighbors Sacae and Ilia, and after successfully conquering them sets its sights for Lycia. Roy, son of Marquess Eliwood of the Lycian territory of Pherae, is tasked with leading the army in place of his ill father to defend his homeland and ward off the invading forces. What starts off as a fight against a hostile nation turns into a quest to gather the Divine Weapons of legend, uncover the truth about an ancient war against dragons known as The Scouring, and save the world from destruction.

The Binding Blade is notable for two major contributions to the franchise. The first is the introduction of the recurring Support feature, an expansion of the Relationship Values introduced in Fire Emblem: Genealogy of the Holy War. Characters build their relationships by spending a lot of time together in battle, which unlocks special conversations between them that allow for extra characterization, Character Development, and occasionally reveal character backgrounds. Unlocking Supports also grants boosted stats to characters with shared ranks when they stand near each other. The second contribution is more indirect — Roy was included as a playable character in Super Smash Bros. Melee, which helped give Fire Emblem international exposure and led to later games getting released outside of Japan.

The game also has a manga adaptation, Fire Emblem: Champion's Sword (Hasha no Tsurugi), that was published in Japan from 2002 to 2005. Taking place concurrently with Roy's story, it follows a quartet of Canon Foreigners on their quest to find the Fire Emblem.

Tropes in The Binding Blade: